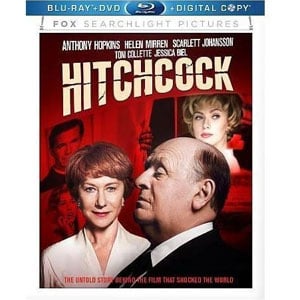 If you’re a fan of Alfred Hitchcock, great acting and want to know some behind the scenes stuff that happened during one of the most iconic movies ever then Hitchcock is the movie to see!

After North By Northwest, Alfred Hitchcock (Anthony Hopkins) felt he needed to reinvent himself. He decides to adapt the horror novel Psycho next, which is based on the gruesome killings of Ed Gein. Alfred and his wife Alma (Helen Mirren) decide to mortgage off their house in order to do the movie since the studios are afraid of backing it. Alfred’s work on the film starts to suffer when he suspects his wife is having an affair. Things work out though and one of the greatest movies ever is made.

Believe it or not, I haven’t seen too many Hitchcock movies. I’ve seen Psycho and part of the Birds but that’s really about it. Does the Hitchcock thing at the old Universal Studios count? Even though I haven’t seen too many movies from Hitchcock, this was still a compelling and interesting drama to me. It really just felt like a reality show starring Mr and Mrs Hitchcock. I have no idea if any of this is true or not or it’s just speculation on what happened.

Anthony Hopkins and Helen Mirren in a movie together, can’t go wrong with that. Hopkins definitely became the famous director, in the way he looked, talked and acted. He doesn’t look 100 percent like Hitchcock but enough to know who he is. You almost forget that’s Anthony Hopkins under all that makeup and fat suit. Helen Mirren, what can you say. She’s always elegant in every role, and her character was definitely a major part of Hitchcock’s career. I never really knew that; that she came up with ideas for certain things like killing off the lead actress half hour into the movie.

The Blu-Ray special features has lots of little tidbits to watch. There’s one deleted scenes, featurettes on the makeup, the story, the cast, film score and other things. I particularly like watching the transformation Hopkins went through to become Alfred Hitchcock. When watching the movie, you know it’s Anthony Hopkins, but when you realize how much different he looks, it’s astonishing.

Hitchcock isn’t something I’d watch over and over but it’s an overall good film. It’s got Anthony Hopkins as Hitchcock, which is something you have to see. This movie makes me want to watch all of Htichcock’s movies now.