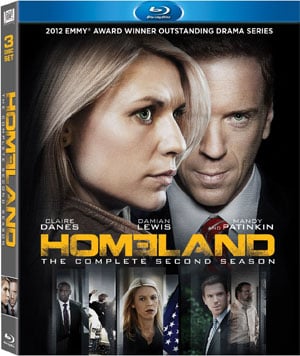 One of the best TV series currently broadcasting is back on Blu-Ray, DVD, etc.! The second season is just as good as the first season with lots of twists and surprises!

When we last left the characters of Homeland, Carrie (Claire Danes) got lobotomized and was done with the CIA, Brody (Damian Lewis) put on a suicide vest and almost blew up the Vice President but backed out at the last minute because of a call from his daughter. The second season is set 6 months later, and Brody is now a US congressman and Carrie is back to being a civilian. Saul recruits Carrie back to the CIA when they get specific intel from one of her former handlers about a terrorist plot on US soil. Slowly but surely, Carrie and Brody’s lives criss-cross and intertwined again in an unpredictable path.

The second season was just as good as the first season. It offered up a lot of holy crap moments, especially the last 2 episodes. With that said, some of the stuff that happened this season was starting to get into 24 territory like Dana Brody’s stupid plotline about a hit & run with the VP’s son. It reminded me of all the dumb Kim Bauer storylines on 24 (ie. cougar run-in). I hope they put an end to that this upcoming season. Some of the things that happened on this season was starting to get a little far fetched I think as well. The first season was a little bit more grounded in reality.

As much as I don’t mind the whole family aspect of Brody’s life, I really just want to watch Carrie, Saul and Brody. Well that’s not true, I love watching the scenes with Morena Baccarin too. The new agent Peter Quinn (Rupert Friend) added something else to the show I think, because you just couldn’t tell if you could trust him or not. The relationship with Carrie and Brody was an interesting one, and didn’t really all that coming. I thought Brody would have been a goner in the second season, and some characters did meet their demise. The way the first and second seasons are, the show could have come to a conclusion since a lot of the loose ends are tied up. Then the finale happened and a lot more questions have just popped up. The third season should be interesting in that I’m sure there’s a new threat, what’s going to happen with Brody, Carrie, Saul and Brody’s family and how’s the US going to respond to what happened in the last episode.

The Blu-Ray has a couple of featurettes spread out over the 3 discs. There’s a couple of deleted scenes that are mainly character development but nothing too important. There’s an interesting prologue to Season Three with Brody somewhere and something bad happens. It’s a quick teaser and gets you hooked in for Season Three. There’s a few behind the scenes featurettes and a fun Super 8 diary narrated and filmed by Damian Lewis. Reminds me of Endless Summer in the way it narrated and shot. All in all, some decent extras but nothing that special.
Homeland season two has a lot of intense moments, answers a lot of questions you might have had in season one and makes you pumped up for the third season! I would have left out some subplots this season but for the most part, this is another excellent season!

The Border: A Prologue to Season Three
A Super 8 Film Diary From Damian Lewis
Return To The homeland: Filming In Israel
Deleted Scenes
The Choice: The Making Of The Season Finale
Audio/Video