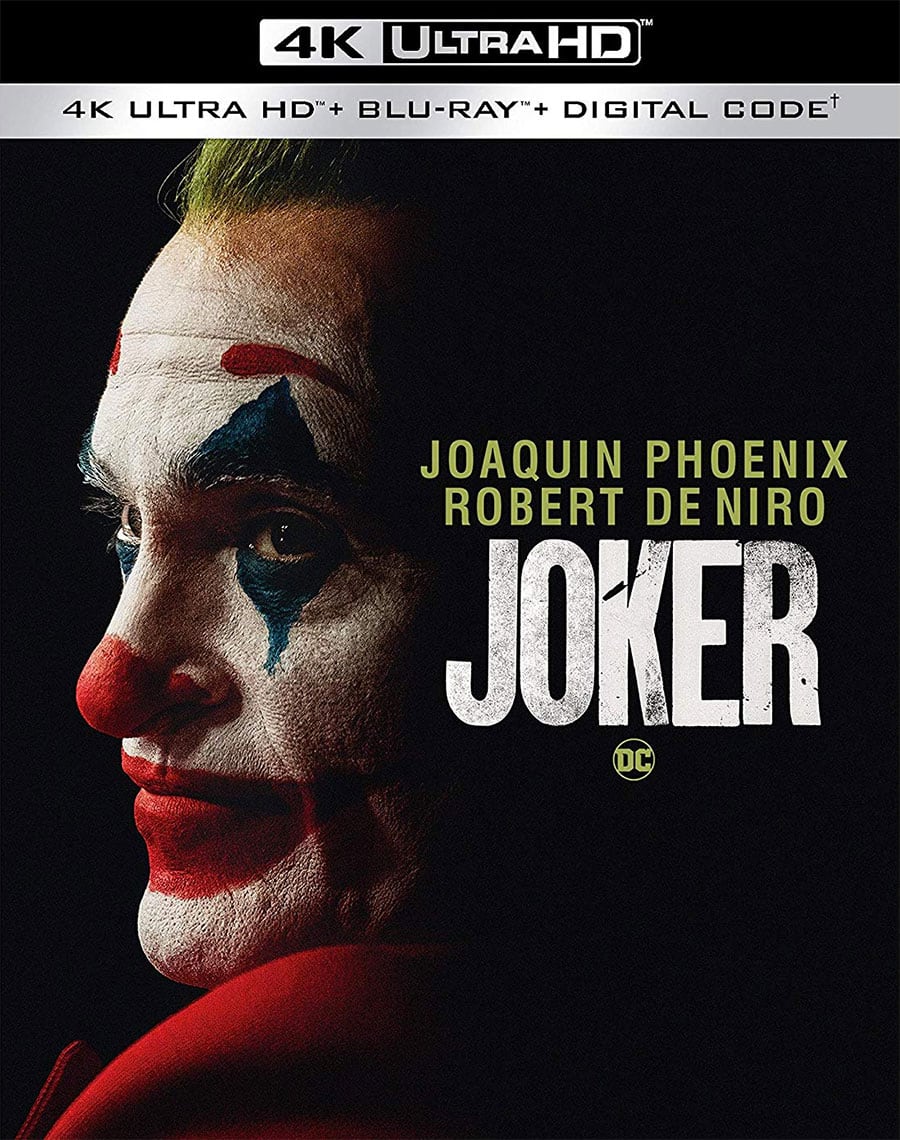 One of the most-talked about movies of 2019 is now out on 4k Ultra HD, Blu-Ray, DVD and streaming. I didn’t see the movie initially in theaters but wanted to. I’m glad it’s out now because it’s an interesting & dark take on the infamous Batman villain.

Joker takes places in 1981, Gotham City (although shot in NYC, Jersey City and Newark) and follows Arthur Fleck (Joaquin Phoenix). Fleck is a failed stand-up comedian and dresses as a clown to get by. He has a laughing condition where he starts laughing for no reason and freaks out a lot of people. As the days goes by, Arthur slowly descends into madness and insanity.

As soon as I heard Joaquin’s laugh in the trailer, I was hooked in and wanted to see this movie. After finally seeing it, I ended up liking it a lot. I knew Joaquin would do this role justice and he certainly has. He played him more like a mentally disturbed character instead of some wacky comic book villain. The movie feels like a grungy, 80s movie like something like Scorcese would direct, if you know, he wasn’t completely biased against the genre. Todd Philips certainly directed an interesting movie that got a lot of people talking for various reasons. I still think Heath Ledger as the Joker was the best but with The Dark Knight, we got the Joker as he’s known to be from the get-go. With this, it was just the beginning of that version of the Joker before the movie ended.

I think part of the reason why I like Joker, and why a lot of people like it is because it didn’t feel like a comic book movie. The film focuses mainly on the villain, and everything is grounded in reality. Phoenix played him like a mental patient, and most of the things he does in this movie are believable in a way. I believe the reason some people were upset was because they were putting this deranged looney on a pedestal in a way, to knock down the rich and powerful. It seems viewers felt like a lot of people who have been wronged in life for getting bullied, picked on, harassed, etc. would riot in the streets during the film’s opening weekend. People were worried about incidents at theaters or even in the streets. In Joker, by the end of the movie, everyone is rioting as the Joker watches with delight. In a way, I could see something like that happening so I could see the concerns but again, this is just a dark movie about Joker. I definitely needed to listen to some happy, fluffy music after watching this because it was just 2 hours of grimey, dark and dreary shit.

The movie looked incredible on 4k, and it was fun picking out spots where this was filmed. I’m sure the stairs scene in the movie will be a hotspot for tourists to visit. Just have to go to the Bronx for it. I recognized a few spots in Jersey City, since I lived there for close to 8 years. I think they were filming at Loews Theatre and City Hall when I moved out of there.

The Blu-Ray is where you can find the extras for the movie, which is understandable since they needed all the space for the movie itself in 4k. The Blu-Ray doesn’t really have that many special features sadly but you have a few things like Becoming Joker, Joker: Vision & Fury, Please Welcome…Joker and Joker: A Chronicles of Chaos. The first one is just a quick test footage of Joaquin trying out different poses, facial expressions as the Joker. The Vision & Fury is about 22 minutes long and really the only thing worth watching because they show some behind the scenes of filming and lots of interviews. Man, Joaquin Phoenix smokes a lot! Seemed like whenever he was being interviewed, he had a cigarette in his hand. The Please Welcome…Joker featurette was various cuts of Joker appearing on Murray Franklin’s (De Niro) show. All of them were good I thought but Todd Phillips had to pick only 1. Do you have him more menacing entering, or being playful?

Joker is certainly to be a debatable movie for some time. I ended up liking it although I was a bit disturbed at what was happening at times. I think one thing we could take away from the movie might be, how about being a little nicer to people? With Phoenix’s excellent acting, Todd Phillips surprisingly dark turn into drama and Hildur’s eerie film score, this was a great flick. I’m not sure how much I would want to revisit it but I’m sure I’ll watch it again down the road.

Bottom Line: An interesting and dark take on the infamous villain with something to say at the same time.
Running Time: 122 mins
Rating: R
Extras Rating:
Overall Rating: