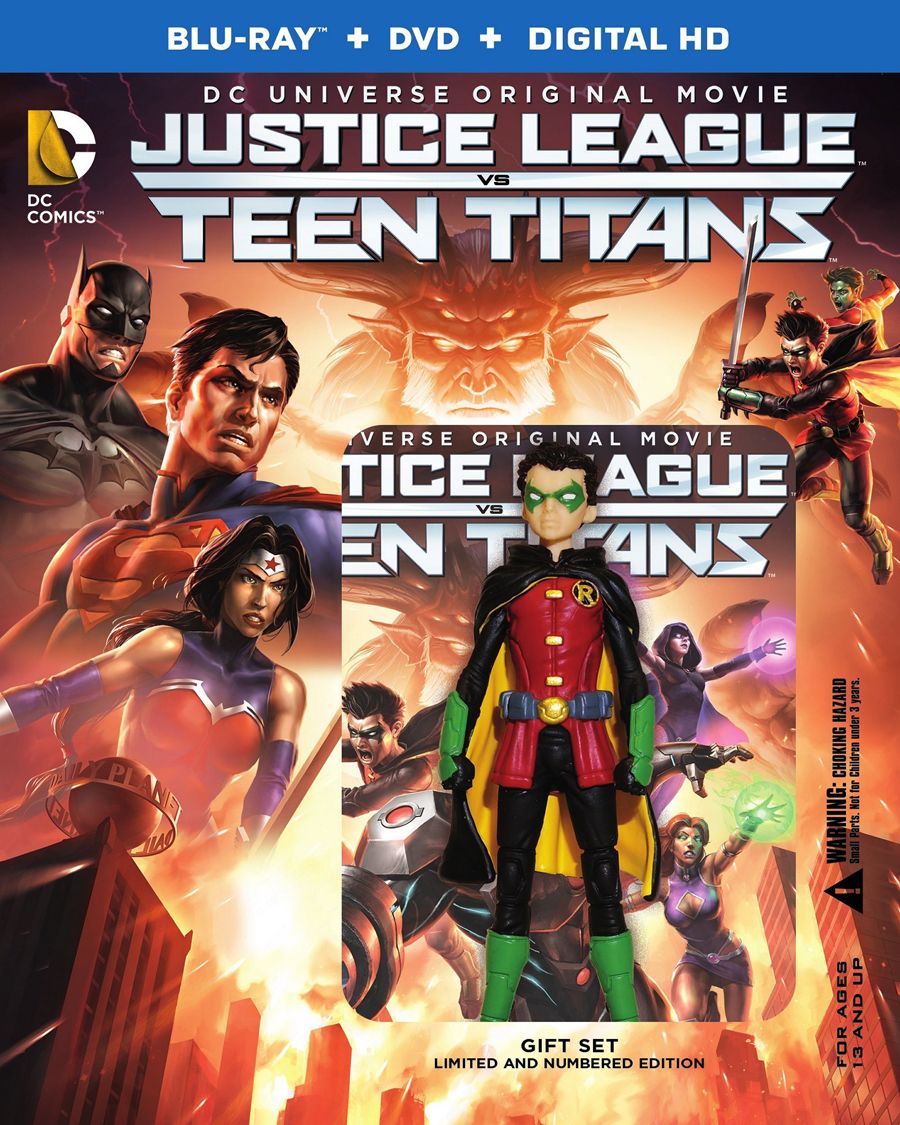 It’s the old and established versus the young and up-and-coming in DC Comics latest animated feature “Justice League VS Teen Titans”. A darkness is looming and only the combined forces of the all-mighty Justice League and a group of upstart superheroes and heroines named the Teen Titans, can stop this evil force from conquering the world.

It’s good to finally see the Teen Titans getting some animated love and, for me, this movie is the closest thing that we’ll most likely get to the Bruce Timm animated Justice League meeting the Cartoon Network’s Teen Titans show. While the Justice League’s roster stayed mostly the same, minus the Martian Manhunter and a conspicuously absent Green Lantern, the Teen Titans lineup varies much from its previous one. Gone is the Tim Drake Robin, replaced by Damien Wayne…as is Cyborg, who is a full-fledged member of the JL. Added to the group is the modern teenage Blue Beetle, who I grew fond of from the “Batman: Brave and the Bold” animated series. Starfire, Beast Boy, Blue Beetle and Raven are established members of the Titans when Batman sends Damien to the group in order to learn some lessons about teamwork and eating pizza. It’s then that the group discovers the dark secrets that the groups’ most introverted and distant member has been keeping from them.

If you’re going to do a Teen Titans movie and are looking for a villain that can take them and the Justice League combined, then you have to include DC’s version of Satan himself…Trigon. Both Trigon and Raven are creations of Marv Wolfman and George Perez and were important staples of their seminal run on the “New Teen Titans” comic in the 80s which reinvented the Teen Titans as more than just castoff superhero sidekicks. While most of the current DC animated films are based on the New 52 Universe, the story follows closely to the early comic origins of Trigon and Raven as Raven discovers that Trigon is trying to breach the walls of hell in order to conquer Earth. Raven believes that the task of fending off Trigon, who is also her father, is her responsibility and hers alone but soon discovers that the Teen Titans won’t let one of their own go at it alone.

As always, the animation and fight choreography for the DC animated movies is top notch. It’s a perfect blend of kung fu movie, anime and American comic book art. The characters have a modern look to them that takes its cues from the New 52 universe but the Titans still have their classic feel too them. Beast Boy still looks goofy in his Legionnaires-style outfit and Raven is as dark and goth as ever. One of my major gripes about the animation is the overly sexualized animation of Starfire in just about every scene that she’s in. From her nightgown scene where she was always squeezing her boobs together which seemed to gratuitously appear on her webcam view on her laptop every time to the almost naked slo-mo changeover into costume via burst of light with major focus on the T & A. There were so many squeezed together cleavage shots of Starfire that one could easily make a drinking game out of it. I would have preferred the much more modest version of Starfire from the Teen Titans show instead of the 90s era fan service version.

Overall, “Justice League VS Teen Titans” was a fun and exciting movie to watch. Whether you’re a fan of the JL or the Titans, there is something for everyone. From the Superman and Wonder Woman trying to fend off a colossal Trigon to no avail, to the horrific way that Superman stops a demonic Flash to Beast Boy transmutating the abilities to turn into the beasts of Hell…there were so many cool moments. One thing that I was hoping was that the personalities of the Titans would be somewhat preserved from the animated series and the writers did a great job of carrying that over for the most part. I was disappointed that Nightwing didn’t play a larger role as a leader but Starfire fit that role well while still keeping some of the quirky aspects of her personality…and one of my favorite parts came at the end of the movie and involved Cyborg being much like Cyborg from the animated series. There was also a nice little teaser at the end that could mean that more Teen Titans animated movies will come our way in the future.

For anyone following this shared DC Animated Universe, “Justice League VS Teen Titans” continues with the high quality entertainment value and introduces a new yet familiar version of the Teen Titans to expand upon this universe. Even with a story that is dark as it is, there is still quite a bit of Titans humor to keep it light. Being more of a Titans fan than of the JL, this is probably my favorite movie in the Animated Universe so far and I will welcome any and all future Teen Titans animated releases. Hopefully, their success will finally bring them to the big screen! Make it so DC! Make it so!

Bottom Line: A great introduction movie for the Teen Titans. You have the Justice League, Trigon, demons and a story focused on Raven’s sad and horrific origin story. What more could you ask for?
A thank you to Warner Bros. Animation for sending the Limited Edition set my way which got a little mangled in the mail, but was still awesome because it came with a PVC figurine of Damien Wayne as Robin and a limited edition numbered slipcase.
Running Time: 78 Mins
Rating: PG-13