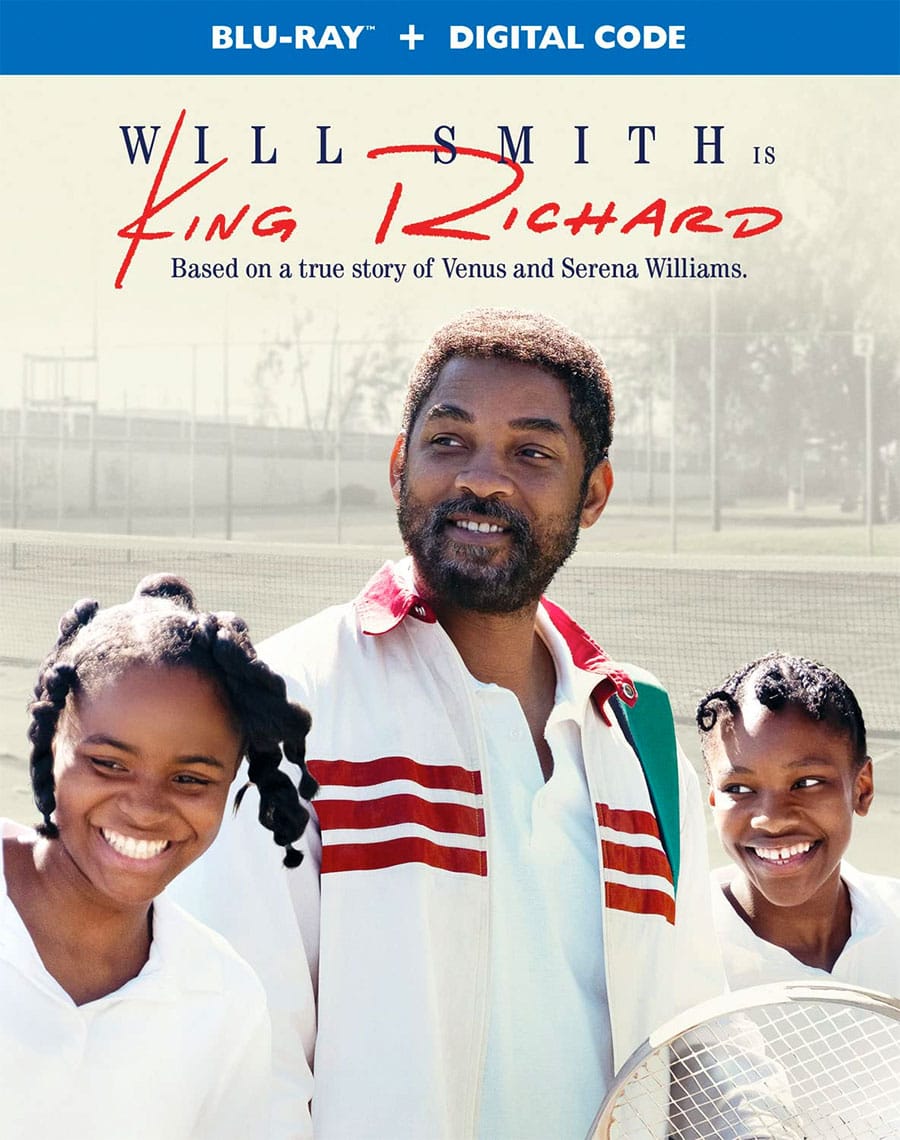 Oscar nominated movie King Richard is now out on 4k UHD, Blu-Ray, DVD and streaming and it’s worth watching for Will Smith’s performance alone. It’s also an inspiring sports biopic on the Williams sisters and their crazy Dad.

King Richard follows the life of Richard Williams (Will Smith), the father and coach of famed tennis players Venus (Saniyya Sidney) and Serena Williams (Demi Singleton). Richard and his wife, Brandy (Aunjanue Ellis) try to balance day jobs while helping the kids do well in school, and have Venus and Serena become professional tennis athletes. Richard actively promotes his daughters to get them a tennis coach so they can turn pro when they are ready. Paul Cohen (Tony Goldwyn) agrees to coach, but only one of the girls for free, which is Venus. Soon the family find themselves in Florida, being trained and coached by one of the best tennis coaches ever in Rick Macci (Jon Bernthal).

I wasn’t aware of the Williams story honestly. I watched them play a bunch but never really knew their story at all. This movie was enlightening on what they had to go through, and what they have accomplished. I didn’t know Venus and Serena had a few other sisters (step sisters?), and pretty much shared a room in Compton. Guess both parents had other kids from other marriages. Watching this movie definitely opened my eyes on some things. I didn’t realize how much their parents were a part of their early careers, especially their Dad. He’s a bit of a pain in the ass, stubborn and crazy but there’s a method to his madness in a way.

The movie focuses on the tennis part for the majority of it, but there is some stuff with Richard dealing with some gangs in Compton. Not sure that happened, if he went to try to kill someone or not, or what but it’s in the movie. Back to the tennis stuff and Richard, I can definitely see how people probably didn’t want to deal with him along the way. I suppose that’s why he’s such a central figure to this story, and of course because of Will Smith’s performance of him. For me anyway, I forgot I was watching Will Smith at times.

The other acting was fine but this is Will Smith’s spotlight again. Both Saniyya Sidney and Demi Singleton were good, as well as Aunjanue Ellis who went toe to toe with Will. Tony Goldwyn and Jon Bernthal both added something to the movie as well. I thought the direction was interesting as it focused on the early years and ended with Venus’s start of her pro career. If it branched out in later years, it might have gotten more messy or just too much to take in. I would have liked to have seen the family rivalry between Venus and Serena play out more on screen though. Besides, there’s always other movies if they wanted to make more movies about the Williams family.

The Blu-Ray has a few featurettes like a making of, a segment about Will becoming Richard with his appearance and voice, and two other things. Just two quick deleted scenes that didn’t really add anything to the movie. For Blu-Ray quality, the movie looked fine on my TV but obviously would have preferred watching this on 4k UHD.

All in all, this is another sports biopic worth watching. I’m not sure how much is 100 percent fact or if there were some liberties taken with the storytelling. The Williams sisters were involved in the making so…I’d watch this if you like sports movies but also a fan of Will Smith, with one of his strongest performances in a long time.