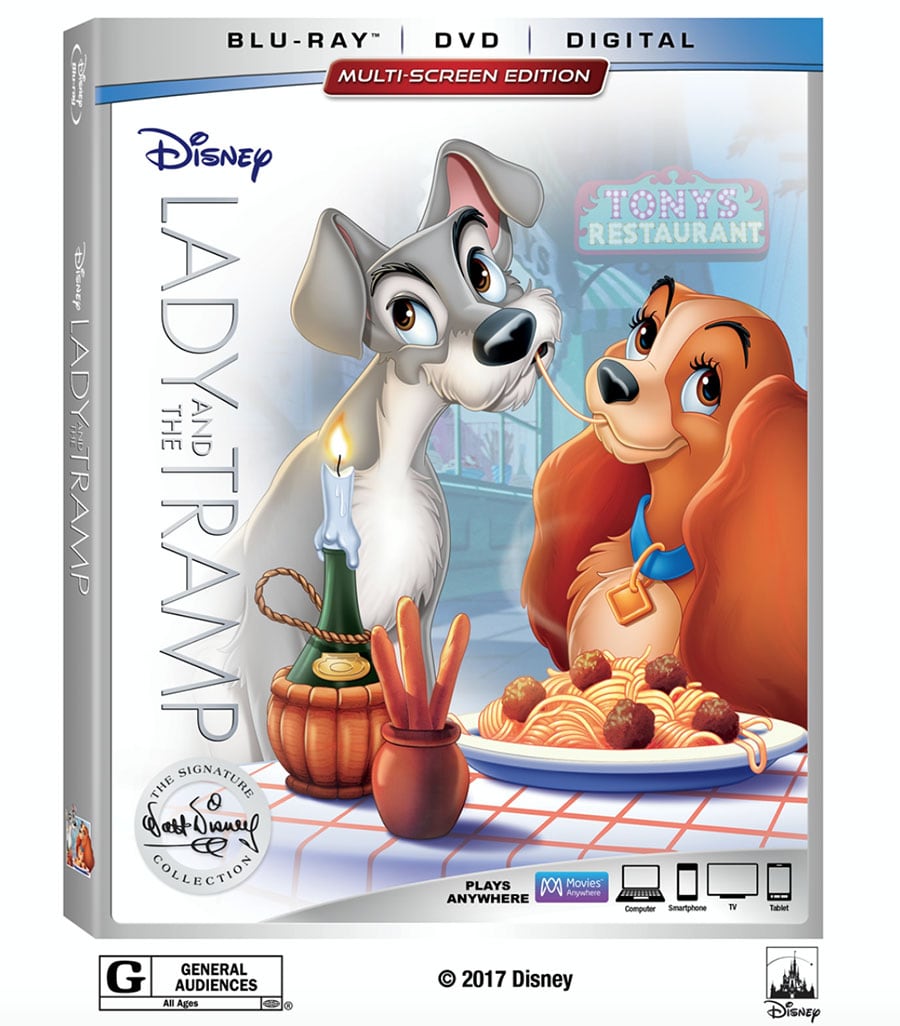 Lady and The Tramp is back on Blu-Ray but this time it’s available on digital HD as well. I haven’t seen the movie on Blu-Ray until now but it looks excellent!

The movie is about a female cocker spaniel Lady (Barbara Luddy), and Tramp (Larry Roberts), a stray dog known for escaping many dog catchers. Lady is owned by Jim and Darling and she’s the spotlight in the house, until the couple have a baby. Eventually she has to escape the house when the crazy Aunt stops by with her siamese cats. She ends up running into Tramp and falling in love with him and his carefree way of life.

It’s been awhile since last seeing Lady and the Tramp. Probably when it was released on DVD several years ago. The movie is still sweet and I like the story. I always seem to forget what happens before I start to watch the movie though. With these old Disney animated movies, the length of them isn’t much longer than an hour and 15 minutes. Making these movies back then was a big task and took years to do. After all these years, Lady and the Tramp still holds up. The animation looks beautiful on Blu-Ray, which I haven’t seen since the DVD.

The thing that people remember is the spaghetti sharing scene but I always remembered other things as well. The annoying siamese cats song but I liked Jock and Trusty. As a kid, I always remembered Trusty getting hit by the car and then Jock howling. Thankfully it has a happy ending and you see Trusty on a couch or something at the end. I think if he was killed, this movie wouldn’t have been as popular but then again, look at Bambi. For the most part, the story is simple enough and works for children and adults.

The extras really aren’t anything that special. You know they are scraping off the bottom of the barrel when they have a featurette on how to make a friggin meatball. I guess it’s relatable for the classic scene but still, what a throwaway extra. Some stuff has been on previous versions before but there’s 2 other new things like Walt and his dogs and stories from Walt’s office. The main sell here is you’ll be able to watch this movie digitally on Movies Anywhere and other places that the movie ports too.

If you already own the Blu-Ray, this isn’t something you want to get unless you mainly want the digital code. I’m all about digital HD codes these days so I would have upgraded if I didn’t get this to review. Lady and the Tramp is a still beautiful animated movie and worth owning if you a Disney-nut like myself. Now if only they would reissue Sleeping Beauty, Peter Pan, Cinderella, The Rescuers, and The Great Mouse Detective.

Features:
Walt & His Dogs
Stories from Walt’s Office
How to Make a Meatball and Other Fun Facts About “Lady and The Tramp”
Diane Disney Miller: Remembering Dad
Never-Recorded Song – “I’m Free as the Breeze”
Deleted Scenes
Classic Bonus Features on Digital Only*
Trailers