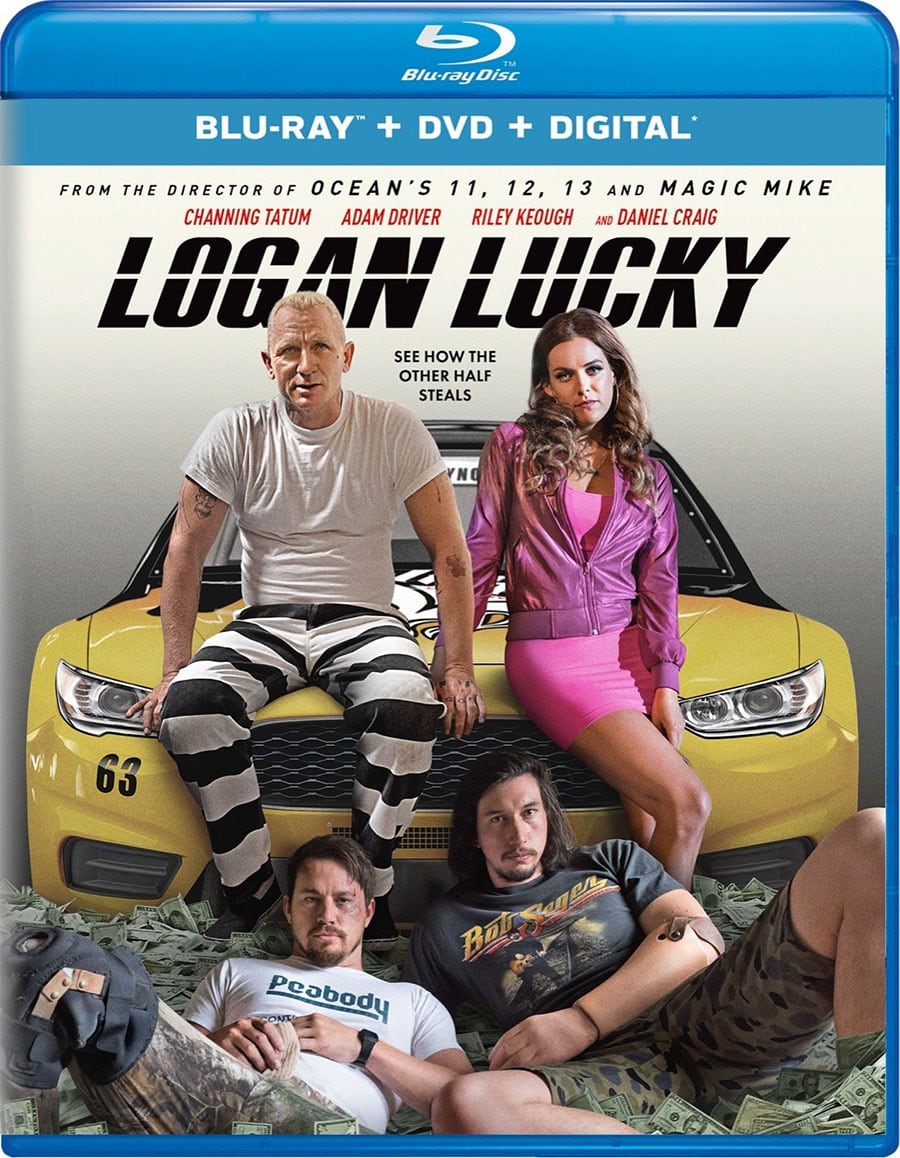 Steven Soderbergh came out of retirement to direct Logan Lucky, and it’s a good thing he did because this was a fun one to watch!

The movie is about the unlucky Logan family as they try to pull off a heist on the Charlotte Motor Speedway during a race. The movie is focused on Jimmy (Channing Tatum), a blue collar guy who can’t hold down a job. While drinking in his brother Clyde’s (Adam Driver) bar, he gets into a scuffle with a British Nascar team owner, Max Chilblain (Seth MacFarlane). He comes up with the idea to rob the motorway but they will need help. The brothers recruit their sister Mellie (Riley Keough), convicted safecracker Joe Bang (Daniel Craig), as well as Joe’s idiot brothers Sam and Fish (Brian Gleeson and Jack Quaid). Only problem is Joe is in prison so in order to pull this off, they need to break him out of prison – in broad daylight.

I didn’t know what to expect from Logan Lucky but ended up really liking it. It’s like the hillbilly Ocean’s 11 in a way. After all, Soderbergh directed those movies so it’s fitting he would come out of retirement to direct another heist movie. By the way, didn’t even know he retired from directing but I don’t think he should considering he’s made some great, fun films over his career. The cast was good with Channing Tatum and Adam Driver getting most of the work. Channing sort of played the normal one, and Adam had the funny lines and moments. Daniel Craig stole a lot of scenes though. The casting is interesting for the supporting characters because a lot of them are kids from other famous actors. Riley Keough is daughter of Lisa Marie Presley, Brian Gleeson is Brendan Gleeson’s son and Jack Quaid is Dennis Quaid’s son.

The movie is generally pretty funny as well. The biggest laughs (for me) came from the inmates trying to stall and find a list of demands for the warden. The list was pretty much them demanding the next 2 books in the A Song of Ice and Fire series (Game of Thrones). The story itself is pretty basic but the way the heist is presented is different. You can most of it as it happens, but then you kind of don’t know what happens after it. They time jump a little and then you see how they did from there. If they decided to do a sequel, I wouldn’t mind it because I liked these characters.

The only extras on the Blu-Ray were 2 deleted scenes. There’s a tap dancing scene with the inmates that was sort of funny but could see why it was deleted. I forget what the other one was. I wish there was a behind the scenes featurette or some outtakes because I’m pretty sure there was some for this one. There’s a digital HD code as well but that’s a given these days.

Logan Lucky is a entertaining heist movie with an excellent cast, good script and the direction from Soderbergh. I’d like to think he’s not done filming movies but if he is, this is a good one to go out to.