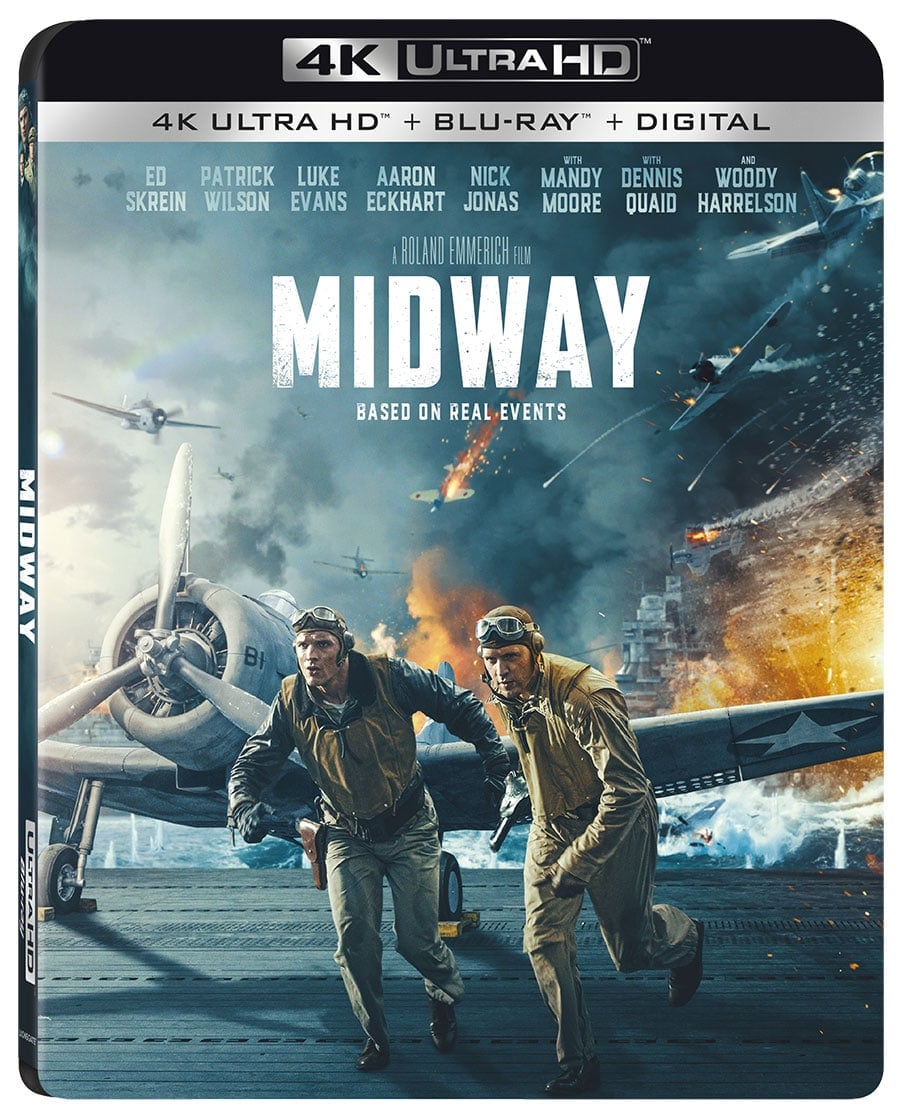 The Battle of Midway gets rebooted into a typical, big budgeted CGI fest from Roland Emmerich. While the film is entertaining and depicts the events after Pearl Harbor more accurately (I assume), the script and some of the acting is pretty cringey at times.

After the attack on Pearl Harbor, the United States enters WWII and the movie centers around the events of the Battle of Midway. The Navy intercepts encrypted messages on where Japan will be striking next: the coral sea and Midway Islands. Intelligence Officer Edwin T. Layton (Patrick Wilson) tries to get ahead of the Japanese on where they will strike next and relay the messages to the fleets. On board the USS Enterprise of the Bombing Squadron Six is Lieutenant Dick Best (Ed Skrein) trying to train and lead his young pilots into battle. The Battle of Midway marked a pivotal turning point in the Pacific for the United States and this movie demonstrates that, to a degree.

I like some Roland Emmerich movies like ID4, The Patriot, and Stargate but there are other movies I’m not a fan of. Midway was entertaining in parts and I enjoy watching historical war movies, but his type of style just didn’t really fit in my opinion. The movie leans too much on CGI, that’s way over the top. You can tell they didn’t go to any of these places to film and the majority of Midway felt like how movies were done back in the early 00s. Everything on a blue screen and it shows. It’s kind of sad when I thought Michael Bay’s Pearl Harbor was better than this, at least in terms of what was shown for Pearl Harbor.

Besides the over the top and unnecessary CGI, and bad special effects at times, the acting and the script wasn’t that great either. The dialogue was cheesy in certain spots and made me roll my eyes a couple of times. Whoever thought of having Ed Skrein be the leading star should have their head examined because he was pretty terrible. I don’t know what accent he was trying to do but it was such a distraction. I guess not all British people could do American accents after all? I still can’t take Nick Jonas seriously either. With Jumanji, he had a small role but I don’t know, he hasn’t hit the acting range where I will start to think differently about him. I didn’t mind the acting of Patrick Wilson, Woody, Aaron Eckhart and the Japanese actors though.

I liked how the movie was more balanced, showing the Japanese side of things. I think my biggest complaint about Midway is you never really get to know the characters. In the two hours and 18 minutes, I barely remember the leading characters names. They are based on real life people too but not sure if it was the actors’ fault or the director/writer’s fault more. This is why Band of Brothers and The Pacific can’t be topped, because you have 10 episodes to really get to know these characters. You care when something happens to them. When you see a badly done CGI plane crashing into the water, you shrug your shoulders. At least that’s what I did. Obviously, this is based on real life and it’s upsetting to see what happened to these pilots and various Navy men, but the movie doesn’t do its job of making me care about them. Basically what I’m saying is they should have made this into a mini-series instead. Although, I’m sure I would have some complaints on the look and style from Emmerich. At least you’d care about the characters then, if done right.

The 4k looked good and maybe too good, because the effects made it look more cartoony in my opinion. The special features include audio commentary and some featurettes. There’s featurettes on keeping the movie accurate, one on the real people that were in the Battle of Midway, and a few other behind the scenes, EPK style featurettes. There’s also a trailer in there too but is that really considered a special feature?

Midway has a few moments and characters I liked, but the overall movie was pretty bland. Character depth is lacking and makes you not care about what’s happening on the screen. The script and various acting was shoddy and questionable. If you’re expecting Saving Private Ryan and Band of Brothers, you’ll be really, really disappointed. Expect Michael Bay’s Pearl Harbor, but even sloppier.

Features:
Audio Commentary by Roland Emmerich
Getting it Right: The Making of Midway
The Men of Midway
Roland Emmerich: Man on a Mission
Turning Point: The Legacy of Midway
Joe Rochefort: Breaking the Japanese Code
We Met at Midway: Two Survivors Remember
Theatrical Trailer