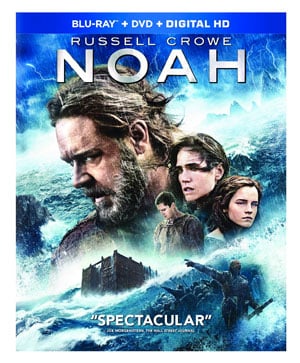 The biblical epic story of Noah is updated and brought to life by artsy director Darren Aronofsky. While I have no interest in the story of Noah or anything religious, I decided to give Noah a chance. The movie is beautifully shot with some decent acting but other than that, not sure people will like this.

Most people know the story of Noah, or at the very least, know he built an ark that had a bunch of animals on it. This movie is inspired & loosely based by the biblical story; like the story is actually real or something. Russell Crowe stars as Noah, who gets an acid-trip vision about a bunch of drowned bodies. He realizes “the creator” has sent him a message that everybody is getting a reboot, except most of the humans on the planet. He and his family build an ark, get some help from some stupid rock creatures and has to battle Tubal-Cain (Ray Winstone), the man who murdered Noah’s Father.

I went into this movie with an open-mind, to see if I could enjoy something that’s based on the Bible. Short answer is no, I didn’t enjoy this movie regardless if it was based on the Bible or not. The film was beautifully shot and visually stunning. I absolutely loved the time lapse/stop motion shots they used in the movie. Really unique and cool! I liked how Darren and company approached this as more as an epic fantasy than outright, shove-religion-down-your-throat-kind-of movie. Although, I don’t think others will appreciate that aspect of it. I was reading comments from religious people and they even hated this interpretation. Religious people hating on a movie, nah get out of here! The popular comment amongst everybody was “this didn’t happen in the Bible!”

The biggest thing, despite the fact they are trying to build a big stupid boat filled with animals on it, is these stone creatures. Why not have them throwing rocks at each other and this would pretty much be The Hobbit: An Unexpected Journey. Do people actually believe in this story? Lord of the Rings and Game of Thrones seems more believable to me. Besides all that, the biggest thing to take away from this movie is that Noah is kind of a big douche.

If you buy the Blu-Ray, you can watch a few making-of featurettes that equal about an hour. Iceland: Extreme Beauty was the best one to see because it’s just all the filming on the mystic Iceland. So many film productions are filming there and you can definitely see why. The other two featurettes shows more of the indoor filmmaking. It’s cool to see the process of trying to film a big epic like this but the extras aren’t as informative or entertaining as something Peter Jackson would do. They are more of a fly on a wall type of style. Not a whole lots of interviews with people.

Overall, I tried to watch Noah with an open mind but in the end, I just couldn’t do it. It’s a visually stunning, okay movie that just seems silly to me.