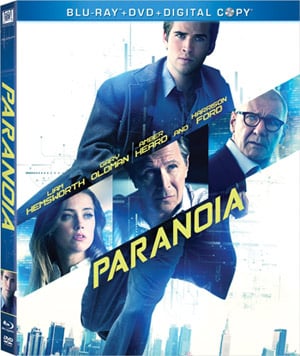 Paranoia had the chance to be a cool, up-to-date tech thriller but instead it just falls flat. The cast is good for the most part but this could have been ten times better.

The movie is about a young tech developer Adam (Liam Hemsworth) who works for Nicolas Wyatt (Gary Oldman). Adam and his group get laid off and decide to use the company card for an all night party in a nightclub in Manhattan. Wyatt and his enforcer/tough guy blackmail Adam into becoming a spy for them, on his rival “Jock” Goddard (Harrison Ford). Adam is stuck between these two tech juggernauts and could lose his life over this.

I went into the movie with an open-mind but just didn’t find this movie all that great. Liam Hemsworth was going in and out of accents which was distracting. Harrison Ford was his grumpy, low-speaking self but Gary Oldman was interesting though. Besides the acting, I just felt like this could have been so much better! I’m all for tech/espionage thrillers but when the movie just seems lackluster from the start, I lose interest pretty quickly.

Why does Adam even have a company card to begin with, and why was it canceled after they left him go? You’d think a tech company would be smarter about that. The whole plot line with Amber Heard was basically useless too. You know what movie is a good tech movie and should have been called Paranoia? Enemy of the State with Will Smith and Gene Hackman. That’s how you do a good tech thriller, and that was released in the 90s!

This movie had a lot of potential but I just didn’t care about any of the characters and thought the movie was pretty boring for a so-called thriller. If you care about the movie, it also has some deleted scenes, and handful of quick featurettes. Just like the movie, nothing worth wild.