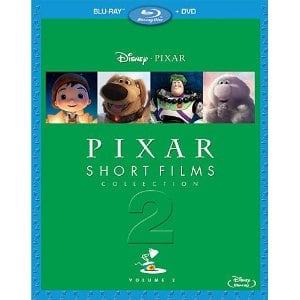 I wish every movie had a Pixar short in front of it. Even movies that aren’t by Pixar. I’d rather have that then the endless amounts of commercials and trailers. At least with a short animated film, you know you’re at the movies and seeing something special. You’re not just thinking you’re home and you’re DVR remote isn’t working to fast forward the commercials. But enough of that rant, Pixar’s Short Films Volume 2 is just as good as Volume 1. It’s just the latest and greatest animated shorts that appear in front of Pixar movies or that were extras on the DVD or Blu-Rays.

Your Friend The Rat is the first short and it was on the Ratatouille DVD and I don’t remember this one. Either way, it was a fun short that explained the history of the rat and why humans shouldn’t be so afraid of them. It’s one of the longer shorts on here as well, which is fine by me. It reminded me of those awesome Jiminy Cricket “I’m No Fool” shorts I grew up on. One of my favorite Pixar shorts is Presto, about a magician’s bunny trying to get a carrot because he’s hungry. Another favorite of mine in recent memory is Burn-E, from the Wall-E DVD/Blu-Ray. The little robot is having a rough day of just trying to put a working light on the ship. Things keep happening and screwing up Burn-E’s day and it’s such a fun short. Dug’s Special Mission is very cute, and I just love Dug. If I ever get a golden retriever, I’m naming him Dug. Dug’s Special Mission is the stuff leading up to him appearing in the movie Up. SQUIRREL!

Day & Night is on here, and that’s another excellent short. Two characters battling over the same scenes, but from a day & night perspective. How do they come up with these stories!? The Toy Story 3 shorts are great as well. Ken needs his own TV show or movie I think. Such a funny character and always amusing to me. The shorts I didn’t care for were for Cars. I still haven’t seen the Cars movies but judging by the shorts, I just don’t like them. The newest Pixar short La Luna, that appeared in front of Brave was cute. Not much in terms of talking besides inaudible grumbling but it was a cute film.

I’m always baffled by all the animated shorts of Pixar of how good they are, and what the subject matter is. I guess that’s why they work for a company like Pixar and I don’t haha. Of course Pixar is a dream job of mine. But anyway, this second volume is less in minutes than volume 1 but it’s still worth owning. I can watch these (minus the Cars shorts) over and over.