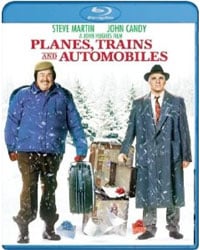 Planes, Trains and Automobiles is a John Hughes and 80s classic. I’ve seen bits and pieces of the movie but never straight through so it was nice to finally see it all the way through. The movie is available on Blu-Ray for the first time!

The 80s comedy movie is about Neal Page (Steve Martin), a high strung advertising executive from Chicago. Neal is on a business trip in New York City, and is trying to get home to his family before Thanksgiving. Right off the bat, things don’t go well for Neal. His cab was taken by a stranger, and his luggage was in the trunk. He finds the guy who stole his cab in New York at the airport, who apologizes. Del is a shower ring salesman who has a positive outlook on life, but is very accident prone. By chance, their paths keep crossing and they end up sitting next to each other on the plane. The plane has to land in Kansas due to a blizzard. Neal embarks on a misadventure with Del to Chicago, as one thing after another goes wrong.

Like I said before, I’ve practically seen the movie but always in piece-meal. I don’t know why I haven’t seen the movie from straight to finish until now. Steve Martin and John Candy are great, and wish there were more movies of them together. Sadly that won’t happen. John Hughes just knew how to write and direct a funny movie with clever dialogue. I mean, that’s what he was known for. This movie frustrates me just because of all the crap that happens to Neal. The classic scene where Steve Martin goes into the rental car place and just drops F bomb after F bomb is just the best. I probably would have done the same thing. But besides being a funny movie, it’s also sweet at the same time. Which was another strong suit of Hughes.

This Blu-Ray looks just okay in High definition. There’s still a bit of grain/noise in the transfer but not sure how much they could clean up this movie and others from the 80s. This might just be a slight upgrade to DVD. The special features include featurettes about the story, John Hughes, the legacy of John Hughes, a tribute to John Candy, and a deleted scene. Not bad considering it’s an older movie and one of the stars passed away.

If you must get Planes, Trains and Automobiles on Blu-Ray, then by all means get it. I wouldn’t really consider this one a must-get for Blu-Ray, as this probably looks just a little bit better than the DVD. It’s not totally bad but depends on how much you’re a fan of the film.

Features:
Getting There Is Half The Fun: The Story of Planes, Trains and Automobiles
John Hughes: Life Moves Pretty Fast featuring John Hughes
Heartbreak and Triumph: The Legacy of John Hughes
Tribute to John Candy
Deleted Scenes