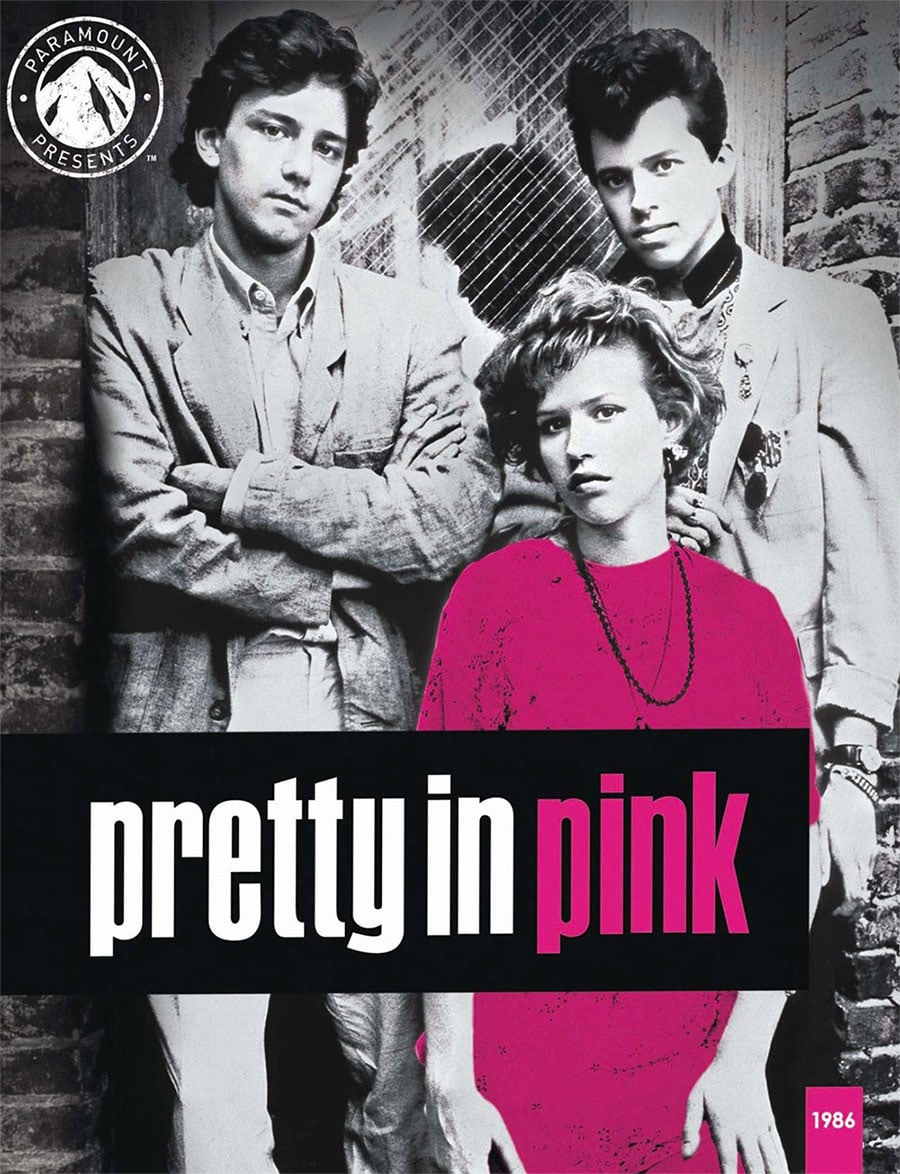 Pretty In Pink is one of those John Hughes written movies that I never really watched until about a decade ago. The second time watching it was to review this Blu-Ray, which is available on Blu-Ray for the first time (really?).

The movie is centered around Andie Walsh (Molly Ringwald), a high school teenager living with her unemployed Dad (Harry Dean Stanton). Her friend is the over-the-top, sometimes creepy friend Duckie (Jon Cryer) who loves her but doesn’t tell her he does. Andie eventually gets asked out by one of the rich, preppy kids, Blane (Andrew McCarthy). That causes friction between the poor and “richie” factions of the Chicago suburban area.

I’ve only seen this movie twice now and not sure why I never really watched it as much as other John Hughes written movies. I like the story and some of the characters but I’m not really a fan of Duckie. I’m sure we have similar taste in music though. He felt so over the top and constantly annoying to me. Granted, I was like him growing up in school but to an extent. I’m sure if I had a time machine and saw myself acting like that, I’d tell myself to knock it the fuck off. About the only part I liked was when he went to fight douchebag Steff, played by James Spader. If I had to pick a Jon Cryer character that I liked more, it would have to be the one he plays in Hiding Out. Molly Ringwald is obviously the stand out here, but so was Harry Dean Stanton. Andrew McCarthy had his moments too. By the way, what was with his hair at the end, at the prom. Woof.

After the second viewing though, I like the story and how it demonstrates the social & class clicks. Still feels relevant to me. It’s been done a lot in movies but Pretty In Pink does it well. The Pretty In Pink soundtrack is obviously stellar with songs from Psychedelic Furs, OMD, The Smiths, Echo and the Bunnymen, New Order and more. Why couldn’t the entire movie take place in the record shop? I just kept trying to pick out all the 80s posters hanging up. Speaking of which, ska fans will notice a familiar young face: Christian Jacobs! The Mc Bat Commander of the Aquabats is the kid being chased out of the store by Annie Potts. Didn’t realize he was in this movie. I had to pause the movie and make sure that was him on IMDB and sure enough, it was.

The extras for the Blu-Ray features a new 7 minute interview with director Howard Deutch. Mainly talked about the cast and working with John Hughes. He talked about how quickly John was able to write up dialogue on the spot to make it better. He also talked about the legacy of the movie, how he got the job and other things like that. The other featurettes were stuff from previous editions of the movie.

Pretty In Pink isn’t my favorite John Hughes movie but definitely has the most heart. Plus, the new wave soundtrack is pretty awesome. The acting from Molly Ringwald and Harry Dean Stanton is strong but even the subject matter of rich vs poor is still, sadly, relevant. Quality wise, the movie hasn’t looked this good so be sure to get this if you like the movie and want it on Blu-Ray. Sadly, no digital HD code with this.