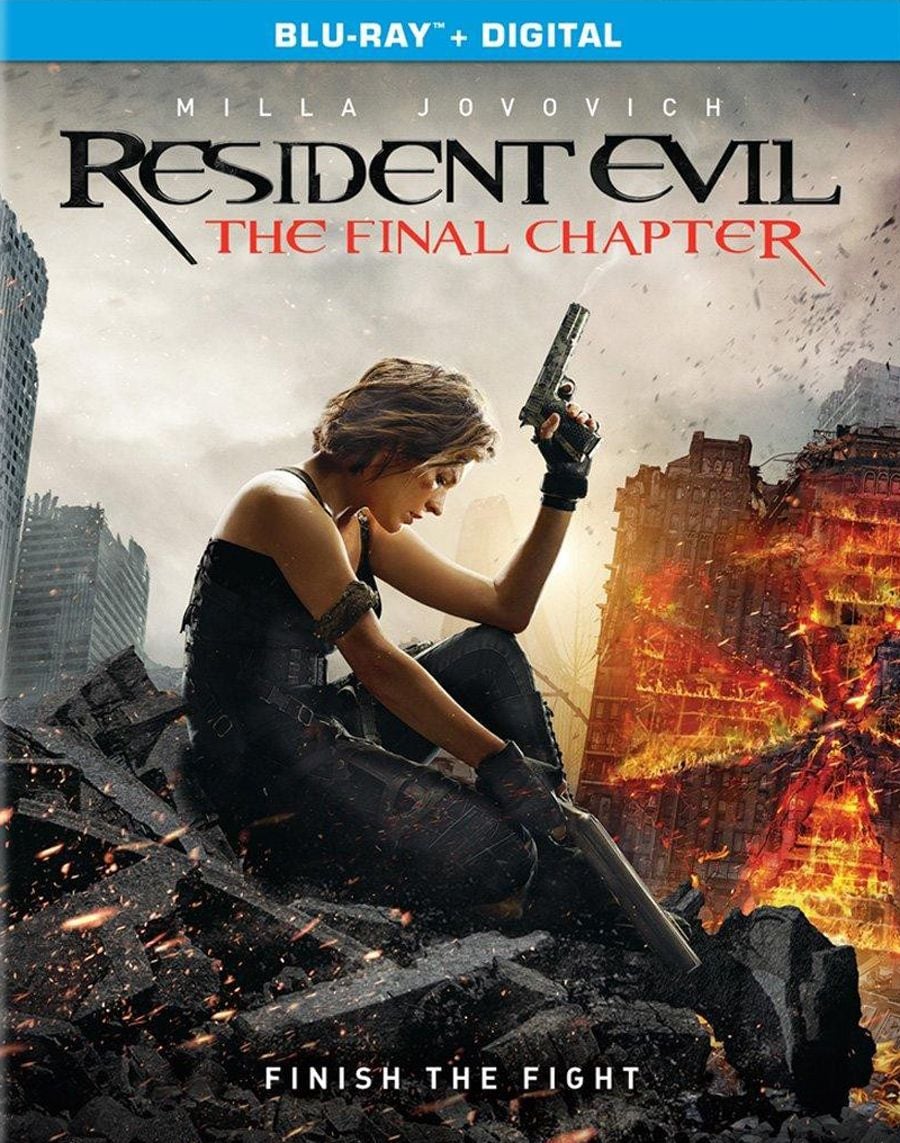 In what has been billed as the final chapter in the Resident Evil movie franchise (it’s in the title!), Alice (Milla Jovovich) must travel back to where it all began, come Hell, high water and hordes upon hordes of horrendous zombies.

Picking up shortly after the cliffhanger from “RE: Retribution”, we learn that A) the director didn’t want to spend the time, effort and money to actually film the potentially awesome everyone-for-themselves battle to the death upon the White House lawn scene or B) they never planned on doing that anyway since most the continuity in the RE movie franchise is virtually nonexistent. Instead of the ultimate battel to the death for the fate of humanity, we pick up with Alice waking up in the ruins of the White House after apparently being betrayed by Wesker (off screen) once again. All of the zombies and monsters were defeated (off screen) and all of Alice’s allies have been killed (offscreen). Being the sole-survivor of her group Alice fends off a flying beast and tries to escape Washington D.C.. It is then that she encounters help from an unlikely ally…the Red Queen, Umbrella’s evil artificial intelligence. The Red Queen informs Alice that there is an airborne antivirus that will wipe out anything carrying the T-Virus, including herself, but she must make her way back to the Hive deep under what remains of Raccoon City within 48 hours.

For those who have followed the Resident Evil movie franchise, you know what to expect from an RE movie. There are plenty of cringe-worthy special effects, ridiculous plot holes and plot twists, Milla Jovovich kicking plenty of ass and looking stunning doing so, over-the-top stunts and action sequences and some pretty amazing looking zombies and creatures. You have to take the good with the bad with this franchise and “The Final Chapter” has plenty of both.

I was happy that Alice was returning to the Hive, where it all began back in the first film. To be able to see the aftermath of the destruction of Raccoon City as well as the state of the Hive and the Umbrella Corporation really brought the franchise full circle. Alice’s journey back to the Hive provided a deeper look into the depravity of the Umbrella Corporation and their disdain for any and all humanity outside of their organization. Using humans as bait to move and control zombie hordes was pretty depraved and their endless supply of abominations at their disposal proved that they will never stop their horrific scientific experiments. You want Umbrella to be annihilated with every fabric of your being and it makes you root harder for Alice to succeed in her mission.

There were some unnecessary plot points on the way from D.C. to Raccoon City such as the rebel survivor camp part which pretty much just ended up being a recruitment center for cannon fodder for gruesome character deaths in creative ways, but things like the return of Isaacs and his holy crusade and the hokey cartoonish Saturday morning cartoon supervillain portrayal of Wesker made the movie more likeable.

When the dust settled and the Resident Evil movie franchise finally (maybe) came to a conclusion, “Resident Evil: The Final Chapter”, for the most part, wasn’t the sendoff that the franchise deserved. Milla Jovovich did what she has always done and carried the movie with every ounce of her abilities. No doubt that, without her, there probably wouldn’t have even been a sequel to the first movie. For those out there that say that Hollywood doesn’t have a strong, confident, tough-as-nails and thrice as badass female lead, then you’ve obviously never seen her kick ass in this franchise. Alice is easily one of my favorite RE characters and one of my favorites in all of Hollywood. If only the video game franchise would get its head out of its ass and make a few games starring her then RE could become the franchise of old. But Milla can only do so much with what she has to work with. As I mentioned before, there are usually some large gaping plot holes and shoddy writing abound with most of the RE movies. Most of the time those can be overlooked because those plot gaps are used to find ridiculous ways to introduce a new monster or over-the-top action sequence or fire fight. But for “The Final Chapter” there were plenty of moments that came out of nowhere that try to wrap up a story thread that never existed before in the franchise (ahem old Alice ahem). Sometimes it felt like there were two scripts for two separate movies condensed into one.

Whether you were a fan of the franchise from the beginning and stuck with it through thick and thin or whether you’re new to the series over the last few years and or movies, you have to know that the Resident Evil movies are here to entertain you with lots of action, gore and violence that is light on story and continuity. They’re not intricately woven together like the Marvel movies are. You can easily start in the middle of the franchise and work your way back to the beginning or just watch every other movie and still get the gist of it. “Resident Evil: The Final Chapter” is more of the same thing that you’ve come to expect from the franchise. Not picking up with the battle that was set up in “Retribution” was a major disappointment but if this is the final journey for Alice, I feel that the film did a good job of giving her character one last hurrah. For every other character in the movie and the franchise as a matter of fact, other than Wesker, the movie didn’t quite bring their stories to a satisfying conclusion. With as ridiculous as the franchise can be at times, it would have been quite easy to find ways to bring back past characters for a fitting ending.

Love them or hate them, the RE movies made their mark and made Milla Jovovich a household name. “Resident Evil: The Final Chapter” wraps things up in a weird, cool, frustrating little package and sends the franchise out with a whimper and a bang all at once. Or does it? Nothing like an open ended ending for something titled “The Final Chapter”. With the RE movies you wouldn’t expect it any other way.

Own it on Blu-Ray Deluxe Edition, Blu-Ray Combo Pack, DVD & Digital HD on May 16!

Bottom Line: “Resident Evil: The Final Chapter” had its ups and downs and as usual, Milla Jovovich carried a movie that needed lots of help getting from point A to point B and a somewhat fitting end to the franchise. Also, Milla Jovovich is still one badass SOB.