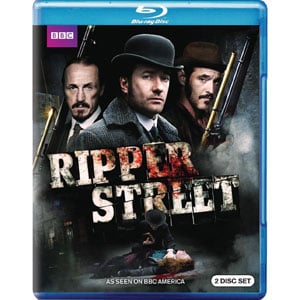 Ripper Street may not please everybody but fans of BBC shows and Sherlock Holmes murder mystery type of shows will appreciate this one.

The BBC series crime drama takes place 6 months after the last gruesome killings by Jack The Ripper…or does it bum bum bum bummmmm. Frequent killings keep happening in East London and Detective Inspector Edmund Reid (Matthew Macfadyen), Detective Sergeant Drake (Jerome Flynn), and former Pinkerton agent Captain Jackson (Adam Rothenberg) team up to stop them. Each episode could be a stand alone that features the trio stopping crime & bad guys so it’s easy to catch up if you missed an episode. There are 8 episodes in total so there’s not many episodes but there will be a second season so it’s got that going for it.

I wanted to watch Ripper Street when it was airing on BBC America, but since I already got a bunch of shows to watch regularly, I decided to wait for this to come out on video. Thankfully it didn’t take long to be released. I thought Ripper Street was interesting and a stylized period crime drama. It felt like Sherlock Holmes movies but a lot better and with actual British people (well besides one). While I liked the show, some episodes were better than others and sometimes the middle of the episodes got a little too slow for my liking. But the episodes usually picked up towards the end.

Matthew Macfadyen is a good leading man and Ripper Street is worth watching if you like him. The supporting cast is strong as well with Jerome Flynn (Bronn in Game of Thrones!) and Adam Rothenberg. It’s hard not to like these three guys playing these characters. I couldn’t help but think of Bronn when watching Jerome Flynn though. I’m afraid he’s always going to be remember that way now but I’m not sure that’s a bad thing for him. He’s not the only Game of Thrones actor on this show; see who else you can spot! I spotted at least 3 others so far.

The Blu-Ray special features have a few featurettes to watch the 8 episodes. A feature about Jack The Ripper, Whitechapel, and some quick inside looks. The little featurettes are too quick and don’t offer up enough info on the behind the scenes stuff of the show. The only thing that’s almost an episode long is the piece on Jack The Ripper. Other than that, they could have done better with the extras!

Ripper Street might excite some, or it might bore others. I liked the episodes but some episodes were better than others. I think the series could benefit from breaking up the stand-alone episodes and having a theme throughout the series to keep the viewers engaged but what do I know. Check this out on DVD, Blu-Ray or catch a rerun.