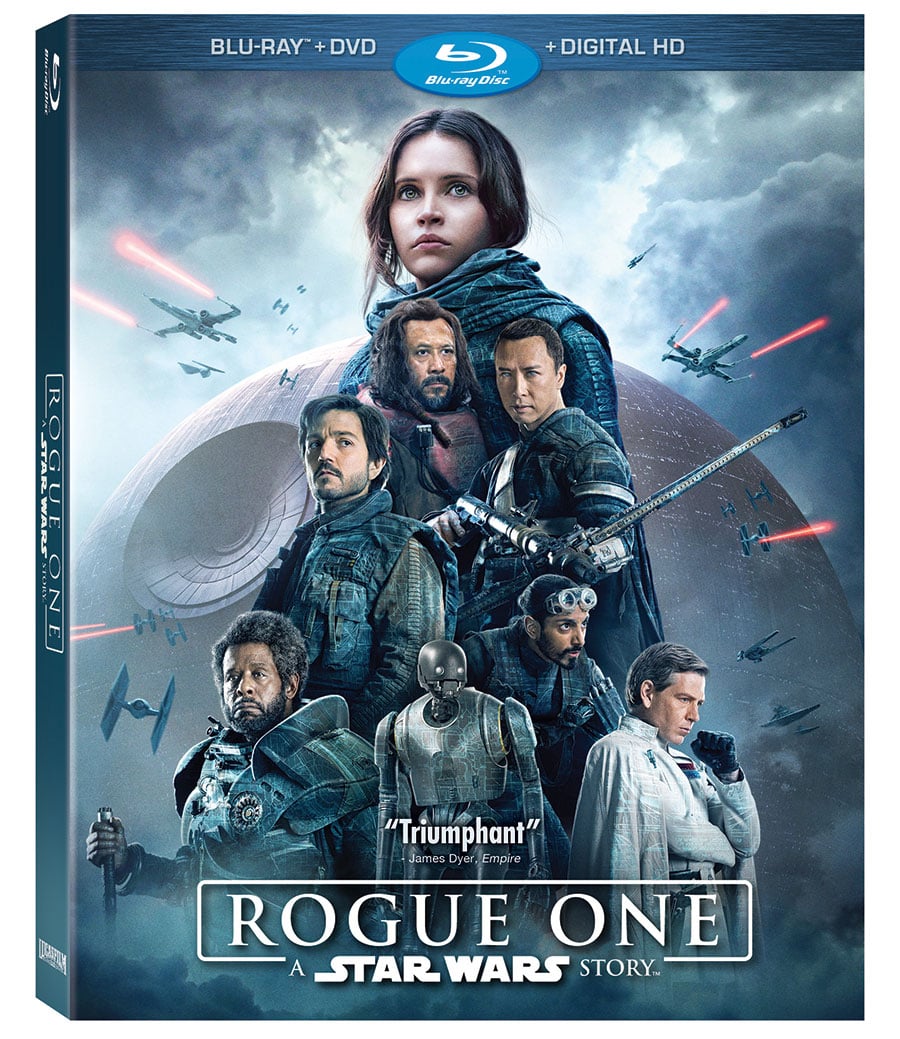 “I Am One With the Force and the Force Is With Me.” Star Wars’ first official stand-alone movie was a smashing success at the box office, and amongst the fans and critics as well. I absolutely loved it and couldn’t have asked for a better movie.

Like I need to tell you the story for this but here I go. Rogue One takes place right before A New Hope. The movie centers around fugitive Jyn Erso (Felicity Jones), who gets rescued by rebel spy Cassian (Diego Luna). The Rebellion recruits Jyn because her father is an Imperial scientist with knowledge of the Death Star. Jyn, Cassian, and a reprogrammed Imperial droid K-2SO (Alan Tudyk) embark on a mission to recover Jyn’s Father and learn more about The Death Star before it’s too late. Along the way, their mission changes somewhat and they bring in defected Imperial pilot Bodhi (Riz Ahmed). They also get help from Guardians of the Whills: a blind spiritual warrior Chirrut (Donnie Yen) and his friend Baze (Jiang Wen). The ragtag team try to sneak in to get the Death Star plans before the weapon is fully functional and the rebel alliance is destroyed.

*Spoilers ahead!* Like with most Star Wars movies these days, you kind of have to go in skeptical just based on how the prequels turned out. Thankfully, the movie turned out great and highly entertaining! It’s a shame the characters are only in one movie because you definitely get attached to all of them by the end. Whatever reshoots they did for the movie, the reshoots really worked. That one scene at the end with Vader is probably in my top 5 favorite movies in Star Wars to date. That’s saying a lot since there’s a lot of memorable moments in the franchise. During and after that scene in the theaters, I remember saying “OH SHIT!!” with a big grinning smile on my geeky face. I heard that was one of the late additions to Rogue One and funny enough it’s the best scene as well.

There’s plenty of fun or cool moments in the movie like when Chirrut takes out all the stormtroopers on Jedha, all of K-2SO’s deadpan quips, Krennic’s visit with Vader and really, just the last act of the movie. Once the rebels leave Yavin 4, it’s just pure joy to watch. Of course you wish the outcome would be different for all of them but I truly think it had to be that way. It ends up being grim when you think about it, but honestly, did you really think most of these characters were going to survive? I didn’t, even before they reshot a lot of the movie. I guess the original plan was for some of them to survive. I don’t know if that would have had the impact it did.

As far as characters are concerned, Felicity Jones did a good job with the role and made you care about what happened with her. I thought the casting of Diego Luna was great and his character fit right in with Star Wars. Alan Tudyk doing motion capture and the voice of K-2SO was brilliant and that character is now one of my favorite Star Wars characters. Every line he said was funny, and brutally honest. A Star Wars movie always needs something like that. Donnie Yen was a bad ass and Chirrut was another favorite of mine. Jiang and Riz did a really great job as well. I love how each one of the characters had a part of getting the Death Star plans and made their sacrifice. Ben Mendelsohn played the evil Krennic quite well, despite him not being British like most Imperial officers were. About the only complaint I had was with Saw Gerrera, played by Forest Whitaker. I just didn’t like his voice and sounded weird. Granted he was on a breathing machine but wish they went somewhere else with that character. Or even shown us more of him in the beginning.

Gareth Edwards direction was good and you can get an idea he’s a big Star Wars fan with the way he handled the material. I loved having Michael Giacchino on board to score the movie since I’ve been saying for years he would be the perfect choice to fill John Williams shoes when he couldn’t do a Star Wars movie. I still think they should have done an opening crawl for the film, and had a little bit more of those classic motifs we know and love from Williams. If they aren’t going to do opening crawls for the stand-alones, I’m ok with it but prefer if they had some text to setup the movie.

The Blu-Ray extras is broken into several segments or if you watch them in the play all mode, it’s about an hour long. It’s shot in a documentary style and really good! Of course since I’m a big Star Wars fan, I wish it was longer and more in-depth than it was. For the most part, each character is given their own spotlight, or some sharing it in a featurette like Baze & Chirrut, Bedhi and Saw. There’s a quick featurette showing you all the easter eggs and hidden stuff in the movie, which I noticed for the most part. I didn’t see some of the cameos like Gareth Edwards as a rebel pilot until they pointed it out.

I found it really interesting on how they did the FX for the movie, especially with Tarkin and Leia. If you’re wondering how they did it, they show you how. If I was making the movie, I’d probably just have Guy Henry in makeup since he sounded so much like Peter Cushing. The effects for him and Leia looked amazing….except the mouth movement. It’s still not 100 percent yet but not sure it ever will be. There’s also the moral thing with it as well. Should you or shouldn’t digitally bring someone back from the dead. With Princess Leia in this movie, it looked good but I think it would have worked just well with her back to the camera. Would have worked just as well I think. The new movies will have to decide what to do with Leia, but I think I read they will not go this route which I agree with. Besides Tarkin and Leia, I thought the FX for K-2SO was outstanding. I really couldn’t tell if it was CGI or not. Having Alan Tudyk on set, in that ugly gray suit, helped with things but still, that character looks fantastic! Definitely worth checking out the extras after you see the movie.

Rogue One: A Star Wars Story could have failed miserably but it succeeds in every way. It’s got great action sequences, funny lines, incredible special effects and graphics, and it’s just a fun movie to watch.

The Stories:
– A Rogue Idea
– Jyn: The Rebel
– Cassian: The Spy
– K-2So: The Droid
– Baze & Chirrut: Guardians of The Whills
– Bedhi & Saw: The Pilot & The Revolutionary
– The Empire
– Visions of Hope: The Look of Rogue One
– The Princess & The Governor
– Epilogue: The Story Continues