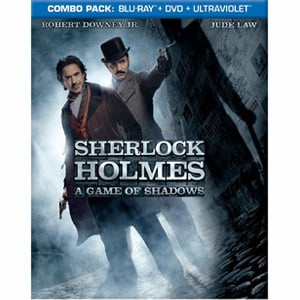 The sequel to Guy Ritchie’s Sherlock Holmes is more of the same. If you enjoyed the first film, you’ll like this one too. I didn’t care for the first one and wasn’t really a fan of A Game of Shadows either. There are parts I like but I have a lot of issues with the movie.

I really can’t explain the plot of this movie, even if I wanted to. Basically Holmes (Downey, Jr.) and his trusty colleague and friend Dr. Watson (Law) go up against Holmes’ greatest adversary Professor Moriarty (Harris). Moriarty is just as smart and cunning as Sherlock Holmes, but really devious. Holmes gets help from a gypsy fortune teller Simza (Rapace) and her anarchist group in trying to battle Moriarty and his men before they create even more chaos.

A Game of Shadows has some positives to take away from the movie, but I believe the negatives outweigh the positives this time. The acting is excellent, the music from Hans Zimmer is always good, the film is enjoyable in spurts. Robert Downey, Jr. is very likable as Holmes; Jude Law as well but one has to wonder why Jude Law didn’t get the role as Holmes. After all, he is British!? The problem I have with Robert Downey, Jr. as Holmes is he sort of mumbles his lines really fast; probably concealing his shoddy British accent. I just think the role would have been better if they cast a Brit instead. I like Jared Harris as Moriarty and think he definitely plays evil characters very well. It was nice seeing Stephen Fry in the movie, just except the naked part haha. I don’t really have any opinions on Noomi Rapace’s character. Didn’t really seem necessary to even have her in the movie quite honestly.

My biggest problems with the movie is with Guy Ritchie. The plot is just as confusing and everything not having to do with the acting was questionable. I’ve been a fan of Guy Ritchie’s since Lock Stock, but since then he’s been hit or miss. I liked Snatch and Rock N Rolla after Lock Stock, but after that nothing much. But then again, he hasn’t done much either. The way he does his slow-mo music video style stuff works for his smaller movies like Lock Stock, Snatch, Rock n Rolla. When it comes to blockbuster style movies, it’s so annoying that I feel like throwing my remote at my TV. Just because you can make trees exploding with bullets in slow-mo, doesn’t mean you should do it.

The scene where they are all running away from gun blasts and cannon fire was the most annoying scene in the movie. Stop, go, stop, go. Just show what fucking happens please. The same can be said for the way Holmes thinks out his moves before he does them. The audience members realize how smart Sherlock Holmes is, we don’t need to see him thinking out every little damn step and spoiling us of the fun of getting rid of a bad guy. Maybe show us that once, but not every time he’s going to do something. It’s like showing us the ending before we got a chance to see the rest of the movie. It’s lots of stupid things like that made me just not like this movie that much.

When watching Sherlock Holmes: A Game of Shadows, I had on & off again audio problems. I’m not sure if it was my Blu-Ray player or not but the audio was waaayy out of sync. Like, 5-10 seconds or so off. I tried to upgrade my player, tried turning off the movie, changed different audio settings and still got the audio sync problems. Not sure others will have that issues though. For video, the movie looked great on Blu-Ray for the most part. The Blu-Ray & DVD combo extras include a featurette, a picture-to-picture, galleries and other little things. If you like Ultra Violet, that comes with this as well. I know some people don’t like UV, but I like it. Just would be nice to have both the streaming and a digital copy as well.

Sherlock Holmes: A Game of Shadows isn’t for everybody and won’t be liked by everyone. The story is confusing, and at times, very boring. The acting is about the only saving grace for this. I have a feeling I’d prefer BBC’s Sherlock instead of these movies.

Features:
Inside The Mind Of Sherlock Holmes – Robert Downey Jr. Takes You Through the Films as Only He Can
Picture-In-Picture
Stills Galleries
Storyboards
Focus Points