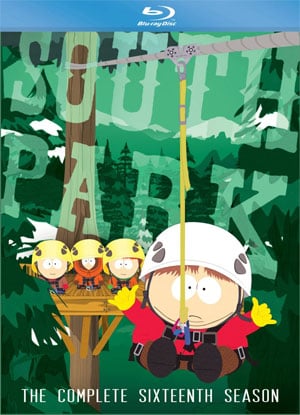 South Park continues to be a hilarious cartoon that provides spot-on social commentary. The 16th season has quite a few gems in it but the whole season is excellent!

The opening episode of South Park Season 16 is a hysterical take on women falling into the toilet if the seat isn’t down. There’s that but there’s also the great jab at the TSA and their over-security they have at airports. That’s the brilliance of South Park because they can combine two completely different things and make it into an episode. Another highlight of the season is the kids try ziplining and it ends up being one of the funniest episodes in the last 5 years! It’s shot like a documentary in a way and has a real-life South Park characters at the end acting it out. Just one of the best episode of the last few years from South Park.

The other episodes in season 16 of South Park include: the boys try to get famous with a new internet meme, Stan wants to raise awareness about bullying, Randy becomes a coach in Sarcastaball, Butters and Kenny travel to the distant islands of Hawaii, Randy manages an abandoned Blockbuster video store in hopes of getting people to rent videos from there again, and Cartman is trying to rig the US election. Lots of different storylines but there is plenty to laugh about.

Like I said above, the ziplining episode and the TSA toilet seats episodes were my favorite of the season. I really enjoyed them making fun of Honey Boo Boo too. Just watching the spoof of that makes me never want to see any more clips from that show. That show should be used to torture terrorists.

In the “Insecurity” episode, that had a lot of hilarious moments as well which included them making fun of the Bane voice from Dark Knight Rises. Whenever there’s a social event, or something talked about so much in pop culture, I just can’t wait what Matt & Trey are going to save or do about it. In most cases, they end up being the best episodes of the season. With all the crap going on this summer, I’m looking forward to the new season of South Park.

With all South Park DVDs and Blu-Rays since the beginning, they have done mini-commentary on each episode. Just a few minutes for each episodes. Sometimes you wish they kept talking but that’s not their style. I was curious to hear their thoughts on some of the episodes, but I ended up listening to all the commentaries since they were so short. Definitely worth listening to if you’re a fan of that sort of thing. Besides the mini-commentaries, there’s also deleted scenes on the disc as well.

Season 16 is definitely on par with the last few seasons. Of course if you want to watch the episodes over and over, getting the Blu-Ray is the obvious answer.

Mini-Commentaries By The Creators Of South Park, Trek Parker And Matt Stone, On All Episodes
Deleted Scenes
Audio/Video