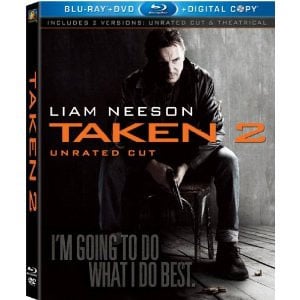 I don’t think Taken really needed a sequel but Taken 2 is still an entertaining action flick. There’s lots of implausible crap in this flick but this isn’t the type of movie you’d expect a bunch of realistic situations. In a nutshell, turn off your brain and watch Liam Neeson kick some ass.

Taken 2 takes place after Taken, obviously. The Father of the guy that Bryan Mills (Liam “I’ve Got a Set of Special Skills” Neeson) killed in the first movie wants revenge on Bryan and sorts him out. Bryan is surprised by his family out in Istanbul for a job, and things are working out okay until the bad guys capture Bryan and his wife Lenore (Famke Janssen). Bryan manages to have a cellphone on him while being captured, and guides his daughter Kim (Maggie Grace) to helping them escape. That’s the basic premise. It’s pretty much “Taken: Take Your Daughter To Work Day.”

Just like Taken, Taken 2 has more of the same silliness. It’s an enjoyable movie and it’s fun seeing Liam Neeson kick some ass but that’s about it. Kim, who’s played by a 20 something Maggie Grace is still being considered young and taking driving lessons. Then later on in the film she’s driving around the streets of Istanbul like she’s Jason Bourne. Another plot point to connect Bryan and Kim together was him having his cell phone on him while being captured. Yes, because I’m sure bad guys never check to see what stuff you have on you when you’re captured. Now that I think of it, another point that was hilarious was when he’s about to be captured, he decides to hold a gun up to the bad guys and CALLS his daughter on the phone! “Oh excuse me Mr Albanian baddie, I have to make a telephone call to my daughter to tell her to escape.” It’s things like that, that make this movie even more stupid than the last one.

But even though I completely bashed parts of the movie, I still thought the movie was decent and a good movie to put on a boring afternoon. The Blu-Ray contains some featurettes like an alternate ending that had Lenore with them in the car chase scene at the end, some deleted scenes, and a few other things. The alternate ending is about 25 minutes long so that takes a lot of the bulk in the special features. I think the ending that’s on the Blu-Ray is better with Bryan Mills going back after his wife.

Taken 2 is a nice companion to Taken in that they are both silly action movies and nothing else. If you enjoyed the first one, you probably will like this one as well.