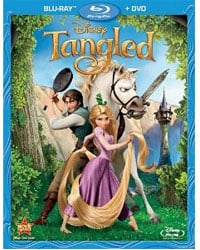 How Tangled didn’t get nominated for a Best Animated Movie at the Academy Awards is mind boggling. The Disney film is probably of the best movies they have done in a very long (that isn’t associated with Pixar) and also one of the most beautifully animated movies ever.

The movie is based on the Brother’s Grimm fairytale Rapunzel except the movie title was changed to Tangled to have a more general name to it. The reason the title was changed because the movie is about Rapunzel (Mandy Moore) AND a thief called Flynn Rider (Zachary Levi). Rapunzel is born by an ailing Queen, and her hair contains magical powers from a healing flower. Mother Gothel (Donna Muprhy), an elderly woman who uses the magical flower to stay young, decides to kidnap Rapunzel and lock her in a tower. She pretends to be her Mother so she can take advantage of Rapunzel’s magical, long hair. Every year on Rapunzel’s birthday, the kingdom sends out sky lanterns in search of Rapunzel. Rapunzel always wants to see them but her “Mother” doesn’t allow it. Eventually Flynn Rider enters the scene, a thief who just stole a tiara from a Princess, and breaks away from his group of thieves. Now he has the other thieves and their horse Maximus after him. Flynn stumbles upon Rapunzel’s tower and gets knocked out by her. They come to an agreement that he will get the tiara back if he brings her to see the sky lanterns that have been looking for her. Adventure and hijinks ensue.

I don’t remember the last Disney animated movie I really enjoyed that wasn’t a Pixar movie. I think Tangled has brought back Disney back to the top of the animation mountain. I have no doubt that Pixar has a heavily influence on this movie. But what I love about the look of the movie is it has a classic Disney look to it. Painterly, traditional 2D animation mixed with computer animation. The best animated sequences in the movie were the sky lanterns and then the action at a dam. Simply astounding!

The story is something most people know, but Disney has made it fresh again with the addition of Flynn Rider and Maximus. Having Flynn and Maximus battle it out was both amusing and comical, and it helped with the movie. The horse acting like a dog in a way, but it still works because it’s funny. Both kids and parents will enjoy that I think, and this movie in general. There are some songs in Tangled, written by Alan Menken, but it’s not so overbearing. Maybe I can just tolerate the songs more than I have in the past. I was so intrigued with the animation and the story, that the songs just didn’t bother me. There wasn’t that many of them.

The Blu-Ray/DVD combo has a few features like 2 original storybook openings, a 50th animated countdown of all those Disney animated movies, some deleted scenes, a making of, extended songs and a bunch of teaser trailers. The deleted scenes weren’t complete, so they were only in storyboard form. The making of wasn’t really a traditional making of because it featured Mandy and Zach quizzing the viewers on things. I was kind of disappointed with that because I wanted to know more about the making of process. I suppose they geared these extras for children in a way, and not film geeks like myself.

If you love other Disney movies like Sleeping Beauty, Snow White and Aladdin, you’ll absolutely love Tangled. It’s perhaps one of the best Disney/non-Pixar movies to have come out since the Lion King. The Blu-Ray is a must own!