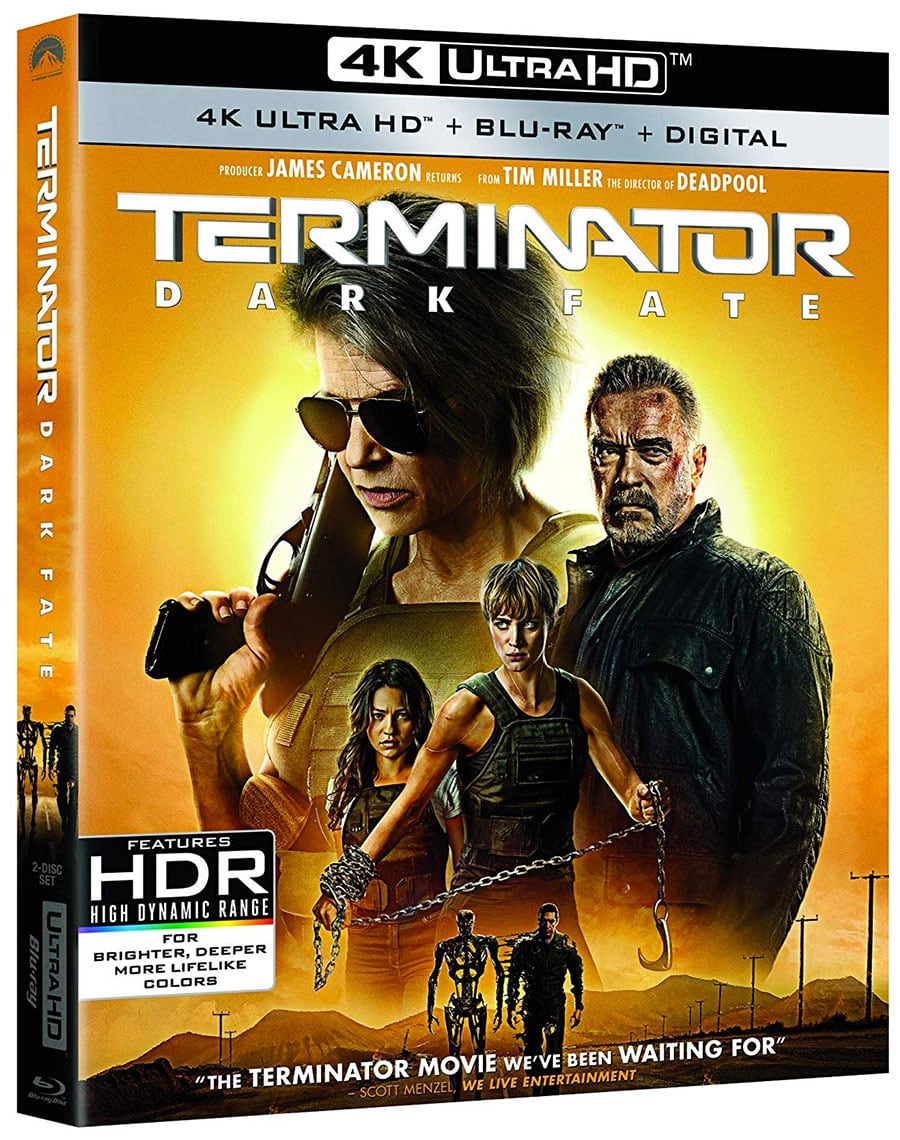 There’s been so many Terminator sequels, and this one is probably the movie that has taken the biggest dump on the franchise. While it’s entertaining than the past sequels, there’s just so many problems with it.

Dark Fate is a direct sequel to Judgment Day, one of my favorite action movies of all-time. The movie takes place 25 years after the events of Judgment Day. Machines send back an advanced Terminator (Gabriel Luna) and it goes after Dani Ramos (Natalia Reyes). Dani is important to the future, ya know – that old gag. Also sent back is Grace (Mackenzie Davis), not a machine per say but one that is part machine though. “Augmented” I guess. While escaping the latest Terminator, they are saved at the last minute by Sarah Connor (Linda Hamilton), who’s been hunting terminators for decades.

I really tried to have an open mind about this movie but in the end, I found too many problems with it. The first minute of the Dark Fate, they retcon things and shit on the franchise basically. They pretty much say, oh you like the first two movies the best? Well, *fart noise* they don’t matter now! I can see why they went that route though. The way they explained it made sense but it was still infuriating to me. Filmmakers try to do something different for each Terminator movie but then every one of these movies feels the same. It’s the same formula when you think about it.

The only thing different is we get a grumpy Sarah Connor like she’s in The Last Jedi or something. I can see why she was pissed but even I don’t drop that many “fucks” in a given day. Just felt a little forced at times. With that said, it was still nice to see her back to the franchise but as I write this review, doesn’t sound like she wants to be back. Arnold is also back..again and that whole plotline was a bit silly to me as well. Don’t want to get into spoilers on how the Terminator was leading his life but it was one big giant eye roll. I didn’t mind the storyline with Grace and actually liked her character the best.

What this franchise desperately needs is something similar to the Mandalorian. Remove all the Terminators and the leader of the resistance and have a story about someone else that’s just in that post-apocalyptic world. Focus just on the resistance fighters, which I think would be interesting. Instead we got another lackluster sequel, even if James Cameron was slightly involved with this. Sounded like he butted heads with Tim Miller. Miller did a good job on Deadpool but wasn’t a fan of some of his choices here. Not sure if that was on him, Cameron, the studio or what. The special effects were at times impressive and other times, weak. There’s wasn’t a good balance of practically effects, actual stuntmen and it seemed like they went with just CGI.

The 4k Ultra HD looks great visually and the sound was good as well. The special features include deleted/extended scenes, A Legend Reforged, World Builders, Dam Busters: The Final Showdown and VFX Breakdown: The Dragonfly featurettes. The extras are lengthy and go in depth on things like the stunts, the visual effects, writing process and of course there’s cast & crew interviews too.

Terminator: Dark Fate is an upgrade over most of the sequels after T2, but that’s not really saying much. I actually like most of the T3 except the killing off of Sarah Connor, but the rest of those movies have been bland. This movie is entertaining enough to please some people but I just thought it crapped on the first two movies with the opening scene. I liked seeing Linda Hamilton back but thought her character was just too damn grumpy ala Luke Skywalker in The Last Jedi. I really hope Paramount thinks hard on what they want to do with this franchise because they still have potential to make something good. Maybe focus on resistance fighters and less on terminators themselves? I just wish this movie was better.