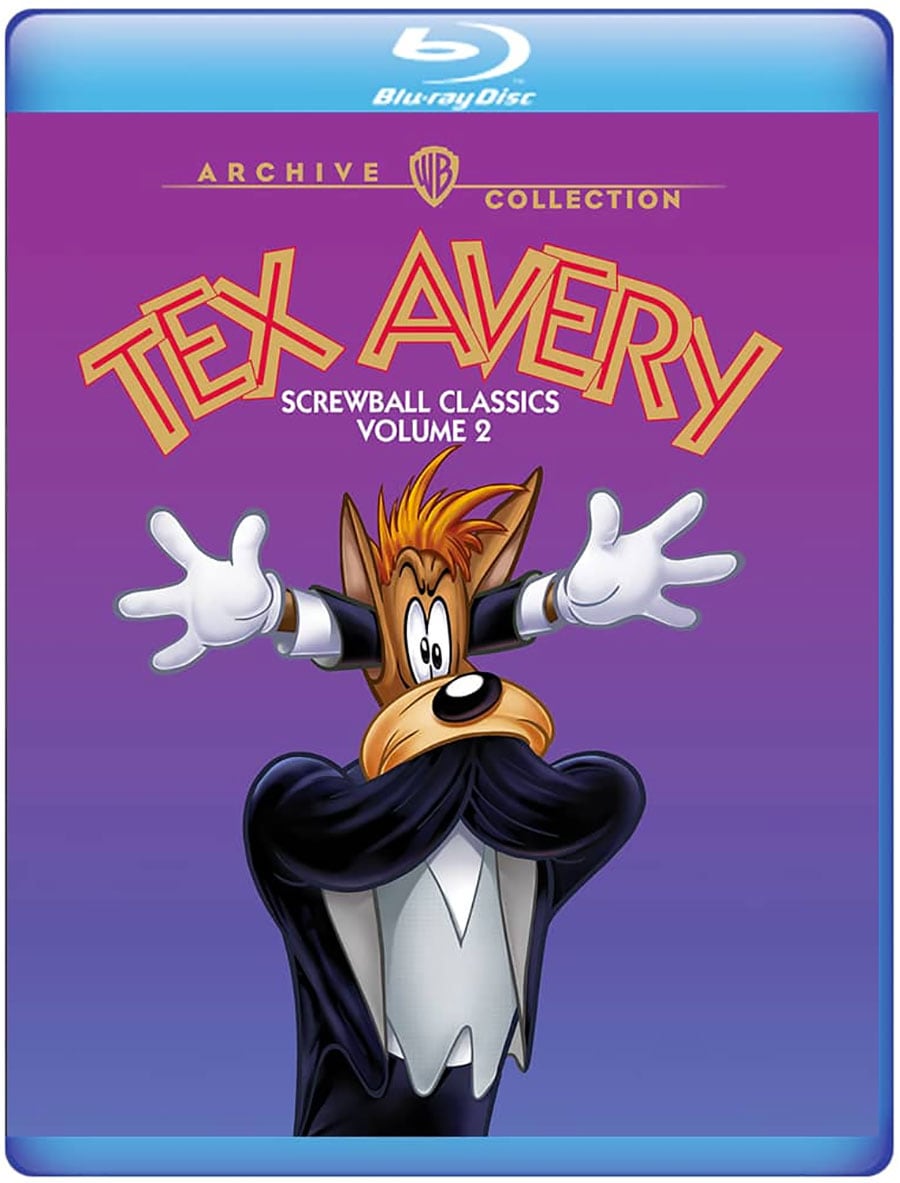 Tex Avery was a brilliant animator, director, and pioneer in the field. His style of animation was great, his jokes were silly, zany and whacky and there’s a lot of classic animated shorts that he has directed that still make me laugh today. Of course, there are some shorts that are a product of their time, definitely not PC and wouldn’t be greenlit today. These are uncut, uncensored, restored and remastered.


Warner Bros Home Entertainment provided me with a free copy of the Blu-Ray I reviewed in this blog post. The opinions I share are my own.

Tex Avery Screwball Classics Volume 2 Blu-Ray contains a few different sections of cartoons. These are all available on Blu-Ray for the first time by the way! First is random screwball collections of cats hating people, caveman, French fleas, Ed the outdoorsman, a cuckoo clock vs a cat and other things along those lines. Then there’s a couple of Spike the dog shorts as well. Can’t forget Droopy Dog either! The last batch is “…Of Tomorrow” shorts like houses/cars/TVs/farms Of Tomorrow. Definitely a great batch of animated shorts for adult cartoon classic collectors like myself.

The first volume was Tex Avery screwball classics was released in the beginning of the year and I haven’t watched that batch yet. I wanted to review it but never got that one, but I’ll get that Blu-Ray soon. This volume contains a lot of my favorites from Tex Avery and this is a great batch of shorts. I particularly like the Cuckoo Clock, Magical Maestro, One Cab’s Family, The Cat That Hated People, Field and Scream and The First Bad Man. One Cab’s Family one is a cute one and I think I remember another one that Tex did that’s of a jet plane. Not sure if that was on the previous set or not. I remember Disney (MGM at the time) would play The Cat That Hated People short in the Sci-Fi Dine-In Theater a lot. Field and Scream is a classic one, with the narration and the jokes about fishing and hunting. That one still makes me laugh.

Magical Maestro I used to love watching, and would laugh at the craziness of it. These types of cartoons made me fall in love with classical music but unfortunately, this one and others are just filled with racist and sexist jokes and references. A lot of these cartoons are soooo inappropriate now that there’s even a disclaimer on the back of the Blu-Ray that these are mainly for adult collectors of animation. Just like old Disney and Looney Tunes cartoons, some stuff is just not appropriate to show children. There seems like a Mother-In-Law joke in every short, which I wonder if Tex Avery hated his Mother-In-Law? After awhile, you can see those jokes coming…There’s just so many jokes about women too, and they won’t go over well either. I mean, they probably didn’t go over well back then either. With that said, I’m happy that Warner Bros has released these uncut because adults can determine which is bad or not. Having them uncut, it’s also just to preserve the cartoons in their original form and how things were back then. As they say, a product of its time – the good and the bad.

The Droopy Dog shorts featured on this include Droopy’s Double Trouble, The Three Little Pups, Drag-a-Long Droopy, Homesteader Droopy, and Dixieland Droopy. These are some of my favorite Droopy shorts. I love Homesteader Droopy and the baby beating up the wolf. Three Little Pups is a short I used to watch all the time growing up (and as an adult) and is a classic one. I always liked the shorts with the Southern Wolf, voiced by Daws Butler. The Of Tomorrow shorts are amusing and what makes a lot of Tex Avery cartoons fun for me, is the narration. I also love the music of Scott Bradley in all of these shorts.

I wish there were more cartoons included on this set but hopefully WB will release more volumes. Not sure how much more Tex Avery cartoons are there but with these 2 volumes, you already have an awesome batch of toons to watch. A lot of negatives were destroyed in a fire back in the 60s so not sure they can restore every single Tex cartoon. The fact these are on Blu-Ray is a great feat in and of itself, plus the shorts haven’t looked better! Also included on the Blu-Ray is an archive documentary Tex Avery: King of Cartoons that’s about 50-60 mins long. Interesting documentary about Tex if you have time to watch it.

Overall, 21 MGM Tex Avery animated shorts on this Blu-Ray and if you’re a fan of Tex, you’ll love this. It brings me back as a kid watching these and I still find Tex Avery’s humor & animation funny….to an extent obviously. Some of these aren’t PC and won’t go over well with people but for the animation collector, Volume 2 Blu-Ray is a must-have.