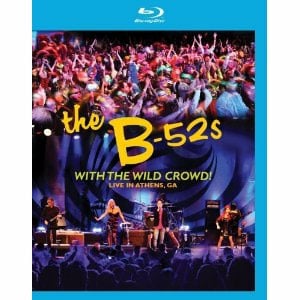 The infamous party band The B-52s returned to their hometown of Athens, Georgia for a special live performance. The concert was filmed for DVD and Blu-Ray, and it’s one any B-52s fan should own. It’s also available on CD as well.

For those that don’t know, the main members of B-52s consist of two female singers Cindy Wilson and Kate Pierson, distinctive frontman Fred Schneider and guitarist Keith Strickland. If you haven’t heard of Fred Schneider’s “Monster” before. Do yourself and listen to that! No need to thank me haha. They are most famous for “Love Shack,” “Private Idaho,” and “Rock Lobster.” Those tracks are represented in this live show, as well as other hits from the band.

Growing up in the 80s, it was hard to not listen to the B-52s. I’ll admit it, I had Cosmic Thing on cassette. I always liked the song “Bush Fire” and “Roam.” Obviously “Love Shack” I liked to; it’s such a fun song. It’s more fun to sing it as Fred Schneider in karaoke though. The live performance on the Blu-Ray is okay and they play their songs well.

I wouldn’t necessarily call it an energetic performance but a lot of the members are in the their 50s so I don’t really expect that. It was still fun watching this and reminiscing a little. I would imagine their stage show was lively in their early years. The B-52s are known for their live shows, and their crazy fans. You can see their fans dressed up in cosmic looking clothing and wigs. Fred Schneider came out in a mullet wig at one point. Hearing “Love Shack” and “Roam” were a highlight for me. I enjoyed some other songs as well.

The quality of the Blu-Ray is top notch, and looked great on my TV. Besides the concert, there’s an interview with the B-52s as well.

Features:
Interview With The B-52s