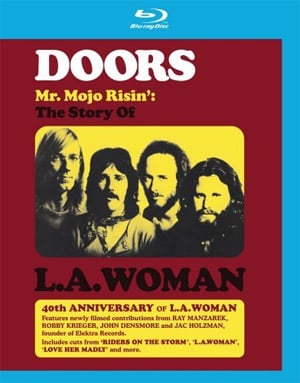 The Doors album L.A. Woman is 40 years old now and to help celebrate the release, Eagle Vision has released a documentary detailing us with how the album came about, what happened during the recording and other stuff that went on. It’s an interesting documentary and one that you should see if you enjoy music documentaries.


The L.A. Woman album was the last album recorded when Jim Morrison was alive. During the recording process, Morrison wanted to take a break and went for Paris. He died there at the age of 27. I got to see him grave this summer when I went to Paris on my Honeymoon. Beer cans, cigarettes and photos of Jim Morrison sit besides his grave. But before all that, we get to hear how some of the songs were composed, and all the stuff that went on during touring and the recording process. The 3 remaining members of the band: Ray Manzarek, John Densmore, Robby Krieger, give nice detailed accounts of the album and have some good stories about Jim. Besides those guys, Elektra Records founder Jac Holzman, their manager at the time Bill Siddons, and others speak about that time period as well. The documentary shows old footage of the band playing, as well as analyze each song on the album.

The documentary doesn’t really offer anything new per say but it’s still enjoyable to watch. Its cool to see some old Doors footage in high definition. After watching this, I had to listen to a bunch of Doors music. I don’t listen to them enough. Besides the documentary that’s about an hour long, there’s also a ton of extra footage as well. That’s also worth watching after the doc.

There aren’t too many music documentaries I don’t enjoy but thankfully this one is a good one. Check it out!