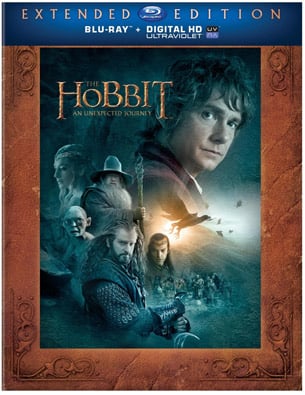 At this point, you’re either a fan of Peter Jackson’s LOTR/Hobbit vision or you’re not. The extended editions of Lord of the Rings were the definite versions in my mind, and the same can be said for The Hobbit: An Unexpected Journey. This Blu-Ray has more scenes added back into the movie and there is over 9 hours of bonus features! Plan a weekend to not do anything because this is a must-have for fans!

I’m not going to discuss the movie a lot since I already reviewed An Unexpected Journey. The extended editions added about 13 minutes into the movie and I’m actually surprised there was that much added back. The Hobbit being broken up into 3 movies already feels like an extended edition. But with that said, I’m all for more time being spent in Middle Earth. 2 or 3 songs were added back, one from Bofur and one from the Goblin King. There was a quick clip of young Bilbo and Gandalf, additional scenes in Erebor, and a lot of scenes in Rivendell. There’s this weird but comical naked CGI dwarves bathing scene in Rivendell that will either make you cringe or chuckle. I think the best or funniest scene added into the movie was Kili checking out all the elf maidens, except he was starting to get the male and female elves mixed up.

I knew once these extended editions were announced, I was going to want this instead of the first Blu-Ray release. The initial release is good to hold me over for 6 months or so, but this is the stuff I want to see! The bonus material alone is worth owning this because no other director comes close to releasing the amount of extras that Peter Jackson does. Peter Jackson is about the only director that truly gets it when it comes to informing his fans with updates on the social sites, video blogs, etc. Just picture all those awesome video blogs but they are about 9 hours long; that’s the extras on the Blu-Ray.

The 2nd disc you get introduced quickly to what you’re going to see by Peter Jackson, as well as get a few glimpses of the next movies. Then the entire 2nd disc is about 4 hours and 50 minutes or so? Thankfully, you don’t have to watch all of them at once and are broken up into categories. The first part is the longest and is about an hour long. It talks about getting The Hobbit made and everything up to the principal photography. It’s glanced upon but they discuss Guillermo Del Toro starting as director and leaving after there were too many delays, Peter coming on board to direct the movie, his ulcer health scare, and training all the actors to become dwarven warriors. They didn’t go into other things (I don’t recall) like the 48FPS debate/backlash, the controversies with animal cruelty, and PJ threatening to move production out of NZ.

Then each section is based on a certain scene or location during filming. The first scenes that were filmed on the Hobbit was with Bilbo and Gollum. They got to work out all the details of the classic scene and then nailed it in my opinion. After filming his scenes, Andy Serkis ended up being 2nd unit director for the rest of the shoot. The next part was a lot of stuff in Bag End, and it was extremely detailed and complicated in the way they were shooting the scenes. It got to be so rough for Sir Ian Mckellen because he was just acting by himself in a green screen set and broke down crying. I felt really bad for him to go through that, and everybody made him feel better the next day. From watching all this stuff, you just get the sense of a brotherhood with all the actors, and a family reunion with the cast and crew who returned. Besides all the filming and technical parts of the shoot, there’s a ton of joking going around and I laughed out loud many times during the extras. Other stuff on here includes filming of the troll scene, going to London to film scenes with Christopher Lee, Ian Holm and Elijah Wood, the Radagast The Brown stuff, the thunder battle scene, and so much more.

And that’s just the 2nd disc, there’s still a 3rd disc that is just as long! There’s an almost-hour featurette about the dwarven families and how the cast feel about their characters and other characters. You get to see the cast doing early screen test and makeup test as the characters, which can be pretty damn funny. Or was that in the conceptualizing the dwarf look featurette? As a fan of the Hobbit and LOTR, I’m still confused on who’s who of the dwarves so this certainly helped knowing who is who. There’s a featurette just on Martin Freeman and Martin certainly doesn’t disappoint with making me laugh. There’s a montage that is just of him flipping the camera off. The other featurettes on the disc include ones on the stone trolls, Radagast, the goblins and orcs, the songs in the movie, and all of the beautiful locations of New Zealand. If I never get to NZ in my lifetime, I’m going to be a very sad man when I kick the bucket.

Watching these documentaries and featurettes makes me realize I got in the wrong business and should have worked on movies. Sure, it’s a lot of hard work but it just seems like something you’d be passion about and don’t dread to do for a living. If I got a call from Weta and said we’d like you to move to New Zealand and photograph the filming or do something else for us, I’d drop everything I was doing and book a flight down there in a second. Of course, I’d ask my wife first but still, I’d love to work for Peter Jackson and his team. In reality, watching all these behind the scenes stuff makes me want to work on any movie really. It just fascinates me how much detail, work and prep goes into making a movie. These documentaries aren’t boring in any way and aren’t meant for just movie geeks like myself. They are done in a fun way, with lots of great stories of making the first Hobbit movie. Of course if you saw the Lord of the Rings extended editions, you know what to expect.

A lot of people have complained and complained about this movie, 48fps, and everything but I could care less really. I’m a Tolkien fan and a Peter Jackson fan and I couldn’t be happier with the way this series is turning out. The extended cut adds some small subtle things into the movie but don’t think it’s the ultimate cut per say. Some might like the theatrical better since it’s shorter and there’s less fluff involved. That’s up to you to decide if you want to see more in Middle Earth or not. Getting this set is a no-brainer if you loved The Hobbit: An Unexpected Journey.