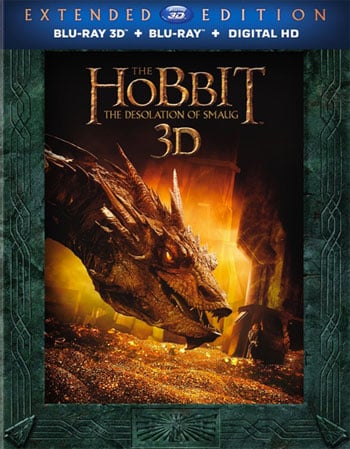 The Extended Edition of the second part of the Hobbit trilogy, The Desolation of Smaug, is now available on Blu-Ray 3D, Blu-Ray, DVD and Digital HD. It’s got an additional 30 minutes added back to the movie and about 9 hours of bonus material. Don’t plan anything for the weekend because this stuff is awesome!

Since I reviewed the movie already, I’ll just cover the extended edition stuff and extras. The added scenes were interesting and you can never be disappointed with Peter Jackson’s extended cuts. The extended cuts are always better because you get some important scenes but also some character depth as well. When watching the theatrical cut, I knew there was a lot of Beorn stuff cut out and it felt rushed. I was right because now you get more time at Beorn’s, which is needed I think because he will return for the third part of the movie. One scene that was quite cool was Beorn and Gandalf talking about the tomb of Angmar. There’s a flashback of the future Witch King being brought into his tomb and Beorn and Gandalf talk about it. It’s just a nice scene that blends the 2 trilogies together.

There’s a whole subplot involving Thorin’s long-lost father and I was waiting for him to turn up since you saw him in the original trailer for The Hobbit. He’s mostly seen in a flashback and then later on with Gandalf. Not sure why it was cut to be honest. The mirkwood stuff was extended quite a bit like Bombur falling asleep and having to be carried. I can see why the stuff was cut because you already got the sense that the woods were enchanted and made you trip out. These added scenes just support that even more. For the most part, the extended scenes or added scenes were beneficial to the story. I’m not sure fans will be confused if they don’t see this cut and then see The Battle of the Five Armies in December. These type of cuts are meant for hardcore Tolkien/PJ fans like myself.

With all the previous extended edition, I knew this extended edition special features were going to be great. There’s over 9 hours of special features, although I guess you can add to that total if you count the audio commentary tracks. The first disc is 5 hours of behind the scenes footage from all the different scenes. You get to go so in-depth with the making of the movie that you makes you feel like you’ve been there watching it being filmed. That disc is the stuff I enjoy the most because it shows all the stuff with the actors and crew. Seeing the actors getting fish dumped on their heads, and riding in the barrels was a lot of fun. The entire 5 hours was awesome and we got to see a sneak peek of some behind the scenes footage of the Battle of the Five Armies.

The second disc is dedicated to all the special effects and post production things like CGI, costume design, set designs, sound effects and the film score. I can’t think of any other directors that dedicate this long of a featurette for film composers. Usually you’ll get maybe 10 minutes tops but the piece on Howard Shore, the conductor (name escapes me at the moment) and the orchestra in NZ is about an hour long! Shore didn’t end up going to NZ this time and ended up just writing all the music. It’s a very extensive feature that movie music lovers will absolutely love. As for the rest of the featurettes, I didn’t get a chance to watch the other stuff yet but I plan on watching the rest of the 4 hours of material. Woof, it’s certainly a lot of bonus material but man, it’s totally worth watching all of it! It’s also the type of bonus material that I can watch more than once too.

The Hobbit: the Desolation of Smaug is a stronger film with the added 30 minutes. The whole Smaug sequence at the end is very impressive but I still think it’s a tad too long. Other than that, the first 2 parts were entertaining and very good films. Bring on the Battle of the Five Armies already!