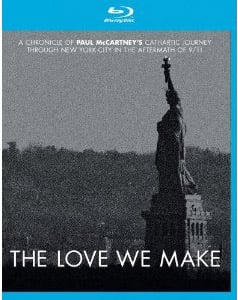 If you remember the big concert at Madison Square Garden after 9/11 to benefit the first responders, now you can see what happened behind the scenes with Paul McCartney. This grainy black & white documentary will please music documentary & Paul McCartney fans.

Paul McCartney was in NYC the day of 9/11. He was in a plane, on the JFK tarmac when they found out about the attacks on 9/11. McCartney felt the first responders, and the city of New York needed a pick me up after that and help organize a big benefit concert at MSG. This documentary shows Paul rehearsing the songs, walking around NYC and interacting with hordes of fans & paparazzi.

I didn’t know this film existed but glad I saw it. It’s interesting to see the behind the scenes stuff and just seeing Paul McCartney go about his day. I like the way the film was shot, with it being black & white but I feel it was way too grainy. Maybe it’s just the Blu-Ray that makes certain scenes so damn grainy. I like the one scene where Paul is walking on the streets and talking with fans. Then afterwards he’s trying to get away from the fans and paparazzi. “Just make this light George…” It’s one thing to be amongst the fans, but definitely need your own time to breathe every once and awhile. Obviously he’s been dealing with this for most of his life. He definitely has a better attitude towards this than other celebrities.

The Love We Make is worth seeing I think. It’s one of the better music docs I’ve seen in awhile, despite the over-graininess of the film.