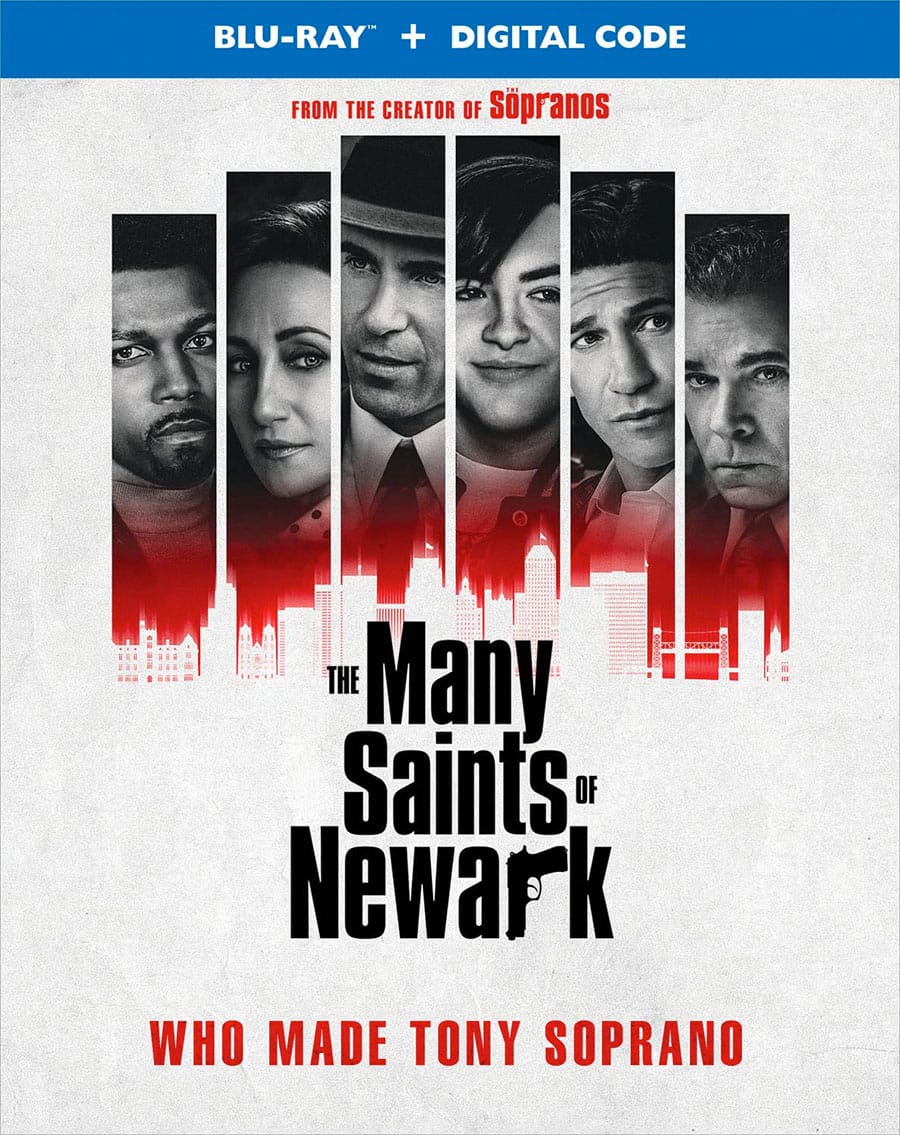 The long-awaited prequel to The Sopranos, The Many Saints of Newark, has arrived on Blu-Ray, 4k and other platforms. I had the chance to watch this on HBO Max when it premiered, and I enjoyed it but it felt really rushed. It would have benefitted being a series instead of a film.

The prequel for Sopranos takes place in the late 60s/70s during the Newark riots era. For the most part, the story centers around Tony Soprano’s mentor and Christopher’s Father, Dickie Moltisanti (Alessandro Nivola). The movie is narrated by a familiar voice, one you can probably guess who. Young Tony (Michael Gandolfini) looks up to Dickie, and begins a path of getting in trouble. During the riots, one of Dickie’s associates, Harold McBrayer (Leslie Odom, Jr) gets involved with the riots and begins to compete against Dickie’s crew. Just like a typical Sopranos episode, there’s violence, cheating, and plenty of humor in the mix too.

I didn’t know what to think after watching Many Saints. Part of me liked it because it felt like a Sopranos episode, and another part of me felt disappointed. I think it was marketed wrong because it felt like you were going to see more of Tony but this is a Dickie Moltisanti movie. That’s fine, but before seeing the movie a lot of people thought it was more about Tony and that wasn’t the case. He was definitely a great character and fit well with the Sopranos Universe per say. I even thought we’d get more from Johnny and Livia Soprano and that wasn’t the case either. There were plenty of fan service moments during this, which felt crammed in there for the sake of it. I guess that’s why it’s called fan service.

I really loved Corey Stoll’s portrayal as Uncle Junior. He looked the part and I wanted more of him as well. It was kind of weird to see Silvio older than Tony because I thought they grew up together, like in high school kind of deal. Maybe I misinterpreted that. Paulie is there and obviously he was older than those two guys. John Magaro, who plays Silvio, had his mannerism and voice down pat but at the same time, it felt like an understudy performance of a play if you know what I mean. It was nice to see Ray Liotta in mafia stuff again, who plays double duty as twin brothers (Dickie’s Father and Uncle). I thought another worthy addition to this world was Leslie Odom Jr.’s character. I liked his storyline and wouldn’t mind a HBO Max series spinoff just about him. Vera Farmiga played Livia quite well but again, not enough of her. Obviously it was weird seeing Michael Gandolfini playing his real life father but it works. Alessandro Nivola was a standout for the movie, of course, since this is mostly about his character.

All the acting was good, I just felt the movie needed to be a 6 episode mini-series or 10 episode series even. Things started to get really rushed by the end and when the movie was over, I was like….man that felt really rushed. When the Sopranos theme song played at the end, it was a big giant eye roll for me. Not sure if there’s an extended cut out there but it definitely could have used one.

The Blu-Ray contains some deleted scenes, a making of and one other featurette. The deleted scenes were interesting, mostly featuring all of Tony, his parents and one good scene with Dickie, Tony and Johnny. The other two had some good interviews with the cast and showed some behind the scenes stuff if you got a few minutes to watch that after the film.

The Many Saints of Newark is for the die-hard Sopranos fans. I’m not sure people will appreciate it if you’re not. There’s definitely some issues with it and sped along too quickly for my liking. This would have been better as a mini-series or series. With all the negative things I had to say about it, I still enjoyed it and wouldn’t mind another movie or series featuring these actors and characters.

Bottom Line: Should have been a series instead of a movie
Running Time: 120 mins
Rating: R
Extras Rating:
Overall Rating: