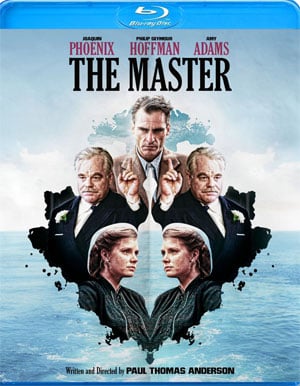 The movie everyone thought was about “Scientology” is out on Blu-Ray and DVD and I really don’t know what I just watched. The acting, the direction and the music are really good but where I’m a bit lost is with the story and editing.

The Master is set in the 1950s and takes place after WWII. It centers on a unstable, sex-obsessed alcoholic veteran Freddie Quell (Joaquin Phoenix) who can’t hold a job and makes his own liquor with paint thinner. He stumbles upon a new cult called The Cause, led by Lancaster Dodd, a.k.a. The Master (Philip Seymour Hoffman). Dodd takes a liking to Freddie and he’s kind of like his latest project. Freddie goes through “processing” of past traumas but ultimately, he still has issues. I’d try to explain more but I’m even lost with trying to describe this movie.

I really wanted to like The Master but I just felt confused in the end. What the hell did I watch for 2 hours? I’m kind of annoyed by the way it ended because nothing is really concluded. The ending is just, mediocre and unresolved. There Will Be Blood, now that was a movie with a great ending!

If there’s reasons to see the Master, it’s because of the acting of Joaquin Phoenix and Philip Seymour Hoffman. The processing scene alone is probably why they got nominated for an Oscar. No idea why Amy Adams was nominated for awards when I barely even remember her character. I don’t remember what she did in the movie, besides jerk off Philip Seymour Hoffman in the bathroom. That warrants an Oscar nomination?

The direction of Paul Thomas Anderson is a love or hate kind of feeling for most people but for the most part, I love his style. It’s got that artsy-fartsy, bare bones, indie feel to his movies. My main problem is just the way the movie was cut up and leaving very little answers about anything. Like with most cults, it feels like the main meaning behind the movie is held in secrecy. It’s frustrating for the viewers. Paul Thomas Anderson feels like that, only ever giving us peeks into his directing style and approach to movies.

The Master Blu-Ray has features like outtakes/additional scenes montage that’s around 20 minutes, an 8 minute short behind the scenes look, some trailers and a documentary about WWII veterans. The outtakes featurette was interesting and done in a cool way, set to the eerie music of Jonny Greenwood. Some scenes I recognized from trailers or clips Paul Thomas Anderson featured in previews. One notable one is when Freddie is doing rorschach drawings and talking about various sexual poses and body parts. It’s quick but quite amusing, to me at least. The 8 minute short gives us a quick glimpse at the filming of the movie, but in a way that doesn’t feel like the normal extra. It felt more like a home movie.

The Master will confuse you but fans of PTA’s style will at least appreciate the attempt. I kind of liked how this movie ended up being an expose on religious cults and how they are a crock of shit. I’m not sure if the director was trying to go for that approach but that’s what I got out of watching this. Sort of similar to There Will Be Blood in a way. But in the end, I’m not sure I’d watch The Master too many times after the initial viewing. Maybe another time just to see if things made sense for me the second time around.