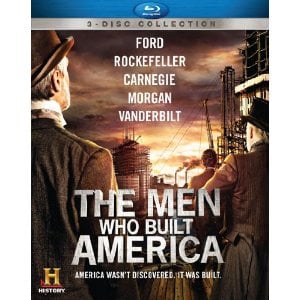 Do you like The History Channel when they actually show TV shows and miniseries based on ya know, History? Well The Men Who Built America is something to watch!

The Men Who Built America tells the story of the industrial innovators like Vanderbilt, Rockefeller, Carnegie, J.P. Morgan and Ford. The series starts out with Cornelius Vanderbilt and his rivalry with Jim Fisk, and then goes through pieces of history. They show the heavy competition between Rockefeller and Carnegie, the bloody outcome from the Homestead Steel work strike, another competition between Morgan/Edison and Westinghouse/Tesla and some other things.

The mini-series is told in dramatic scenes as well as narration and interviews from modern moguls like Mark Cuban and Donald Trump. The narration is what drives the story and then told through some scenes and then every now and then there will be the interviews. The mini-series originally was broken down into four 2-hour long episodes but each episode on the Blu-Ray is an hour long. The narration is done by Campbell Scott this time, and not Liev Schreiber, who I think has worn out his voice for these shows…”…and it changed the course of history….”

Originally I thought the series would be a history adaption like Hatfield and McCoys but it’s similar to what History Channel is known for with mixing re-enactments, interviews and narration. But you can tell the budget was increased a lot and it actually helps hold up the mini-series well. It’s not cheesy like these have been in the past. I did learn a lot of things from watching this, including that Carnegie was really pronounced KAR-NAY-GEE. Saying Kar-nay-gee Hall would just sound silly I think. He was also Scottish, which I didn’t know which proves I didn’t learn a damn thing in high school history class.

As much as these people built America and revolutionized the way we do things, it also proves how shady & scummy things were back then that got us to where we are today. Like Carnegie, Rockefeller and Morgan teaming up to elect William McKinley just so he wouldn’t put a stop to their monopolies. Corrupt back then and still corrupt today. But with that all said, this is still an interesting mini-series except I would have cut out the narration and interviews and just make it a real history TV mini-series. Imagine something on HBO that’s on History Channel. Do we really need interviews with Trump? We’ve heard enough from him! But between The Men Who Built America, WWII in HD and Hatfield and McCoys, The History Channel is on the right track with dramas and mini-series that both entertain and inform. The amount of TV series they could do are endless and I would love to see more about early American History, French/England history and WWI and WWII era (but I guess Spielberg and Hanks have that one covered).

Features:
From Rich To Richer
The American Dream
Monopoly
Competitive Nature
The Every Man
The Rise Of Cornelius Vanderbilt
Traits Of A Titan
Carnegie