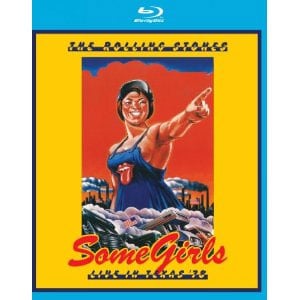 Rolling Stones are still alive & kicking surprisingly, and Some Girls Live in Texas ‘78 Blu-Ray shows the band in top form. If you like the Blu-Ray, there’s also a Blu-Ray/CD and DVD/CD combo as well.

This Stones concert takes place on July 18th 1978, the day before I was born! The concert was filmed at the Will Rogers Memorial Center in Fort Worth, Texas and is in support of their album Some Girls. During the summer when they were touring, they reached #1 on the U.S. Charts. This concert is just the Rolling Stones rocking out in Texas, with not much elaboration or anything like that. Many of the tracks from Some Girls are played here but there’s also some of the earlier classics thrown in here as well. It was funny to hear Mick say at some point that he was too winded or energized from having sex all last night. It’s also funny to see them look so young back then.

The video quality is decent for being 33 years old. It was originally shot on 16mm and then converted, restored and the sound was remixed as well. Pretty impressive stuff. The Blu-Ray quality really enhances the old footage. I would have tweaked the levels a little bit to give a bit more darkness to some areas. The video comes across very light and white. But what can you do, it’s from 1978? Besides the concert that’s about 80 minutes, there’s some extra like a new Mick Jagger from this year, SNL clips, and a few other things. This is a worthy purchase if you’re a die-hard Stones fan.