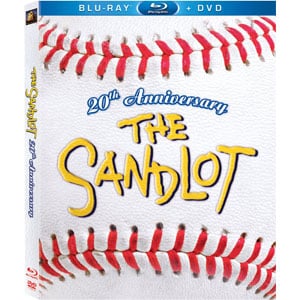 You know you’re really getting old when The Sandlot has turned 20! For it’s 20th Anniversary, 20th Century Fox has re-released (again) The Sandlot on Blu-Ray and the movie still makes me laugh out loud.

The Sandlot is set in the summer of 1962 and is told through the perspective of Scotty Smalls (Tom Guiry). Smalls doesn’t know anything about baseball but that doesn’t stop Benny (Mike Vitar) from asking him to play on their baseball team. It takes awhile for the other guys like Ham (Patrick Renna), Yeah Yeah (Marty York), Squints (Chauncey Leopardi), and others to warm up to him at first but sooner or later Smalls comes into his own. The group loves everything baseball, but they have to contend with a beast of a dog that lives right by their baseball field and eats up their balls…baseballs I mean! Benny, Smalls and the rest of the group have to come face to face with the beast once and for all when they lose a prized baseball that Smalls borrowed from his Stepdad.

I still can’t believe that The Sandlot is 20 years old. The movie still holds up very well and is still making me laugh after all these years. I still crack up at all the ways they tried to get that Babe Ruth ball back and also the classic scene involving Squints and a certain pretty lifeguard. I’m sure every kid growing up wish they tried something like that on one of their crushes. Besides the baseballs scenes, I just love this movie for all the suburbia scenes. The tree houses, the 4th of July fireworks and food, and other things. It definitely makes me reminisce of my suburban youth.

When watching the Sandlot, I realized there really aren’t these type of movies being made anymore unless it’s from Pixar. Movies that both adults and kids can watch, it isn’t too vulgar and a nice coming of age story. If there were being made now, they would either be extremely over the top (I’m fine with that) or the opposite (not a fan of that). The Sandlot offers up both and that’s why people still love this movie. I think it’s one of the best sports movies ever made to be honest. I hate baseball but I love watching this movie.

This 20th Anniversary Edition comes on Blu-Ray and DVD, and offers nothing really new except some player cards of the Sandlot crew. Big stinking whoop. Would have been nice to have a retrospective featurette on the cast. Something like where are they now and their memories of making this movie type of feature. But nope, we just get recycled crap from the DVDs. The main selling point here is the movie of course and if you don’t own it on Blu-Ray, now’s a good chance to get it.