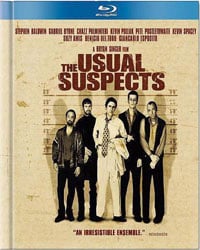 “The greatest trick the devil ever pulled, was convincing the world he didn’t exist.” The Usual Suspects is the type of movie where you find yourself watching it as soon as you stumble upon it on cable. The critically acclaimed movie is now re-released on Blu-Ray in digibook form. So in other words, if you don’t already own this movie on Blu-Ray, there’s no reason for the upgrade.

The film is centered around a group of thieves/con men and a mysterious mobster called Keysyer Soze. The story is told from the perspective of one of the survivors of the heist, Verbal Kint, played brilliantly by Kevin Spacey. He narrates the film for the viewers and to the detective who’s trying to make sense of what happened. The film is told in flashback, and Verbal Kint leads us up to the night where everyone ends up dead except him. Just when you think you know what is happening, the story goes in another direction and gets even more complicated. The question on everyone’s mind is who is Keyser Soze?

It’s hard to talk about the movie without giving anything away but I’ll try my best not to divulge that info. The movie had a wonderful cast, excellent story from Christopher McQuarrie and direction from Bryan Singer. Kevin Spacey is great and the definite stand-out, but the supporting cast is just as strong. The story is very complex, and if given to the wrong person, this would have been a muddy piece of shit. But thankfully, it’s not and the plot keeps you guessing until the very end. Even after the movie ends, you find yourself trying to re-trace your steps in your mind on what exactly happened. It’s one of those movies that you need to watch more than once. It’s also one of those movies that makes you feel like you just watched something that never ended up happening, and feel like it was a waste of time. But I don’t think it’s a waste of time since it’s entertaining, and one of the best films of the ‘90s. The Usual Suspects is a movie that other directors wish they directed, and actors wish they starred in. After 1995, many movies went on to put twists in their movies just for the sake of it, but the Usual Suspects is different. There is a story behind it, and it leads the audience through hoops to get to the twist.

Since this was already on Blu-Ray, I’m not sure if this is worth the upgrade. I don’t think anything was improved since the other one that came out in 2007. The only thing different is the book/case that the movie comes in. There’s some photos from the film, a blurb on the actors and some brief write-ups of the twist and how the movie was only made for 7 million. It’s the ultimate success story in Hollywood. Cheap budget, great cast, wonderful story, young directors, and Oscars to boot. Can’t beat that!

Bottom Line: One of the best movies to come out in the last 20 years!
Running Time: 106 mins
Rating: R
Extras Rating:
Overall Rating: