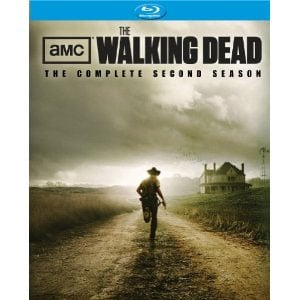 Besides Game of Thrones, The Walking Dead is the other show I’m obsessed about. Despite the slowness of Season 2, it’s still a highly enjoyable series for me.

Season 1 of the Walking Dead ended with the crew leaving the CDC in Atlanta. Battered, tired and desperate for hope. Season 2 begins some time after that (?), and they are on the road again. While stuck on the highway, they encounter The Million Zombie March on the highway which results in losing Carol’s daughter Sophia. While searching Sophia, they encounter Herschel Green (Scott Wilson), his hot daughter Maggie (Lauren Cohen) and his family, who take them in. But there’s something more to the family than meets the eye. Rick, the group and the Greene family struggle to hold onto their humanity by trying to stay alive.

This season has it’s fair share of scary moments, gross moments, and holy crap moments. I can think of a few scary moments like the highway march, Shane & Otis getting medical supplies and loads of scenes from the finale. Grossest moments of the season has to be the gutting of the zombie and the sewer zombie. The sewer zombie made me want to vomit even though it looked very silly. It was just gross. The holy crap moments had to be a certain character that wears a hat getting killed considering he survives much longer in the comic. As soon as I saw that, I knew they were willing to change a lot of things from the comic. I think it’s good to be different because it gives the comic book fans something to look forward to and not be completely spoiled. Who wants to know everything that happens; what fun is that?

The moment in the season finale with the main characters is something we were expecting for a while, as far as comic fans are concerned. It did happen a little bit differently than it did in the comic but we still got the same result. I’m really looking forward to Season 3 because it just looks action-packed, especially with The Governor showing up. I’m sure he will be sticking around for a season or two, I can’t see how they will close out that storyline so fast since fans consider that’s the best era in the comics.

The Blu-Ray special features is packed with goodies! You have audio commentary on select episodes, a bunch of tiny featurettes, webisodes and a half hour worth of deleted scenes! The featurettes talk about certain things on the show like who to kill and who to live, the music, setting the barn on fire, the cast and lots more! It was nice to see a little bit on the score from Bear McCreary since the opening theme is very memorable.

The deleted scenes were particularly good, especially the opening scene from the first episode. You see them try take shelter with Guillermo’s crew after the CDC and you find out what happened to them. The place is overrun with zombies but there’s something more to it then zombies. The other deleted scenes were short but some were decent. The best one though is that alternate/deleted scene that’s 10 minutes long. I think that probably should have been left in but glad they included it in the deleted scenes section.

For me, The Walking Dead season 2 has a lot of great things happening for it. But there’s also some slow parts that bog down the series in the middle like searching for Sophia. Once that is settled, I think the show picks up again. I’d expect the 3rd season to be even better!

Features:
Featurettes: All The Guts Inside, Live Or Let Die, The Meat Of The Music, Fire on Set, The Ink is Alive, The Sound Of The Effects, In The Dead Water, You Could Make A Killing, She Will Fight, The Cast On Season 2, Extras Wardrobe
6 Webisodes
Audio Commentaries On Episodes 1, 7, 8, 11 and 13
Deleted Scenes: What Lies Ahead, Save The Last One, Secrets, Pretty Much Dead Already, Nebraska, Judge, Jury, Executioner, Better Angels, Beside The Dying Fire

Jeffrey Dean Morgan will play Negan on The Walking Dead