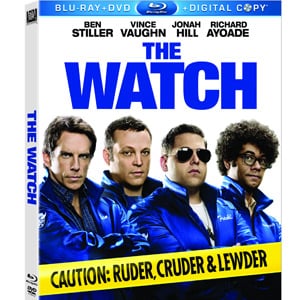 On paper, The Watch looks like the best comedy of the year. Great cast, good writers, an interesting director, what could go wrong? Unfortunately, The Watch only has sporadically funny moments and could have been so much funnier.

In Glenview, OH, Evan (Ben Stiller) is the type of guy that’s involved in every little thing in the community. Plus, he’s a senior manager at the local Costco (plug plug plug). His security guard ends up getting murdered viciously, and Evan decides to start up a neighborhood watch to stop further crimes from happening. Only 3 people show up to join the watch: Obnoxious Father Bob (Vince Vaughn), a high school dropout and police officer-hopeful who failed every test for the exam, Franklin (Jonah Hill), and Jamarcus (Richard Ayoade), a recent divorcee who wants to have his balls sucked by a hot Asian woman. Things don’t go as plan at first for Evan and the group, not to mention the bumbling cops that think Evan had something to do that with murder. The group slowly discovers that there are aliens amongst them and have to stop them taking over the world before it’s too late.

You would think with this cast and premise they would come up with something funnier than this. I saw this movie in the theaters and laughed, but it just felt like this movie could have been so much, much, much better. Ben Stiller called this one in and wasn’t interesting and Vince Vaughn was over the top and extremely obnoxious. I usually like Vince Vaughn but this movie I simply couldn’t tolerate him. I thought he was a better character when he was trying to protect his daughter towards the end of the movie, but the first half of the movie I just wanted to scream “JUST SHUT THE FUCK UP!” The rest of the cast: Jonah Hill, Richard Ayoade and Will Forte were hilarious. I’ve been a fan of Ayoade since IT Crowd so I was glad he finally appeared in an American movie; I just wish it was a better comedy. It was amusing seeing him shoots guns in slow motion though. Will Forte was in the movie on and off but I almost wished he was part of the main group instead.

Everyone was talking about the crude and gross humor, but I don’t think that was the problem. I think the problem were the characters and just a weak script from Seth Rogen, Evan Goldberg and Jared Stern. Crude, gross and inappropriate jokes can be funny, but the jokes need to be better. I don’t think Akiva’s directing was the problem either. But with all the negative stuff I had to say about the movie, I still laughed or at least chuckled at some of the jokes. It was kind of nice to see Rosemarie DeWitt in some nice lingerie though but that’s not going to save a movie from being just mediocre.

The special features include 24 minutes of deleted scenes, Jonah Hill alternate takes, some behind the scenes footage, and some other things. This movie does not have any extra footage added back into the movie like the studio is claiming. At least I don’t remember seeing anything new. If there is anything new added back into the movie, it’s minimal and unmemorable. All the extra stuff is in the separate deleted scenes section. I liked watching the Gag Reel and the alternate takes from Jonah Hill. He’s one of the few actors working that can do so many takes and they are always funny. I enjoyed the behind the scenes featurette that was about 10 minutes long or so. It seems like the cast had a good time filming this, despite the lackluster results.

The Watch will be hated by most, liked by some. It has some funny stuff in it, but the script sucks and this sci-fi comedy could have been so much better.