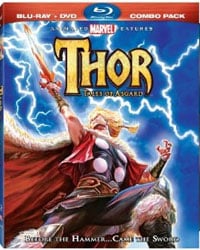 “Thor: Tales of Asgard” is a kind of prequel to the live action “Thor” movie but not quite. If follows a similar structure of a coming-of-age Thor who, in his arrogant youth, seeks to prove to his father that he is no longer a child. In his brashness he seems to cause more harm than good by accidentally igniting a war between the Frost Giants and the Asgardians.

In “Tales of Asgard”, Thor is but a teenager who has yet to leave the royal grounds of the kingdom. He is full of himself and he isn’t afraid to show it, bragging to the ladies and paying no mind to the fact that the Royal Guard always lets him win even though they are much more skilled than him. He receives a dose of reality from none other than Lady Sif and decides that it is time that he proves himself to her and his father. Thor has heard the tales of the lost Sword of Surtur, an item of immense power that the bravest of Asgardian warriors seek out on pilgrimages every year. Grabbing his brother Loki, Thor stows away aboard the ship of the Warriors Three and the journey begins.

Once Thor and his brother reveal themselves to the Warriors Three, the Warriors are reluctant to go with Thor on his journey but as the Price of Asgard, they must obey. The group tears up an outpost and head into the deepest reaches of the Nine Realms. Their travels take them through Niflheim, home of the Frost Giants, a race that shares a fragile peace treaty with the Asgardians. It is there that Thor and Loki discover the Sword of Surtur by retelling the stories and fables of their youth. When Thor wields the sword, he is overcome by the immense power of the ancient weapon but its darkness and evil begins to grip him. It is not long after discovering the sword that the group realizes that they have been  discovered by the Frost Giants. While the rest of the group wants to flee, Thor, possessed by the power of the sword, wants to stay and fight. Reason prevails but trouble ensues shortly after and the power of the Sword of Surtur is too much for Thor to handle. He accidentally slays some Frost Giant sentries and destroys a passage between realms.

As Thor and his group of warriors, struggle to get back to Asgard, news spreads of his actions against the Frost Giants who see his actions as an act of war. The Frost Giants march upon Asgard and Odin discovers the consequences of the actions of his sons. Odin confronts the king of the Frost Giants and informs them that he knew not of the actions of Thor and Loki and asks to halt the march upon Asgard the Frost Giant king agrees and Odin sends the Dark Elf, Algrim after his sons. Algrim has ulterior motives and, when he finally discovers Thor and Loki and coerces the Sword of Surtur from them, turns on his friends and allies and uses the sword to get revenge for the betrayal of his people. Algrim turns the sword on Odin and the Asgardians. Thor and Loki are all that stand between the destruction of their home and their fathers demise. The paths that the two brothers take are what shape their futures and gives foreshadowing to who they will eventually become.

“Tales of Asgard” was an interesting take on the Thor mythology. Marvel has not often touched upon the early days of the God of Thunder and it was interesting to see how close the relationship was between Thor and Loki whom are often portrayed as bitter enemies. They stood together and fought side by side as equals until the end. I also thought that this movie did the Warriors Three proud. Often reluctant to do battle, when it came to crunch time, they totally kicked ass and took names later. The overall art style was also a fitting tribute to the early Jack Kirby days of Thor and his iconic vision of Asgard and the nine realms. His influences are clearly visible in various comic book and cartoon series to this day.

I have been very satisfied with just about every one of the recent direct to DVD animated Marvel movies with the exception being Ultimate Avengers 2. “Thor: Tales of Asgard” is on par with the others. The animation in high def is crisp, clean and vibrant. The voice acting was cast very well with the choice to bring in actors that fit the role rather than a big name that provides nothing more than a name to attach to the movie. “Thor: Tales of Asgard” is a must for not only collectors of the Marvel animated movies but for anyone that is looking for a fun action/adventure flick. Just because Thor isn’t quite the stud yet that he is in the movie, doesn’t mean that this piece of the Odinson’s history should be cast aside like a foul smelling troll. The movie is a fun, unique view into the history of one of Marvel’s lesser-known characters and makes a great companion to the live action movie.

Bottom Line: Although the story isn’t really a tie-in to the movie, it fits into the universe that Marvel has created for Thor with the live action movie. It is an interesting tale of the earlier years of the God of Thunder.
Running Time: 77 Minutes
Rating: Not Rated
Extras Rating:
Overall Rating: