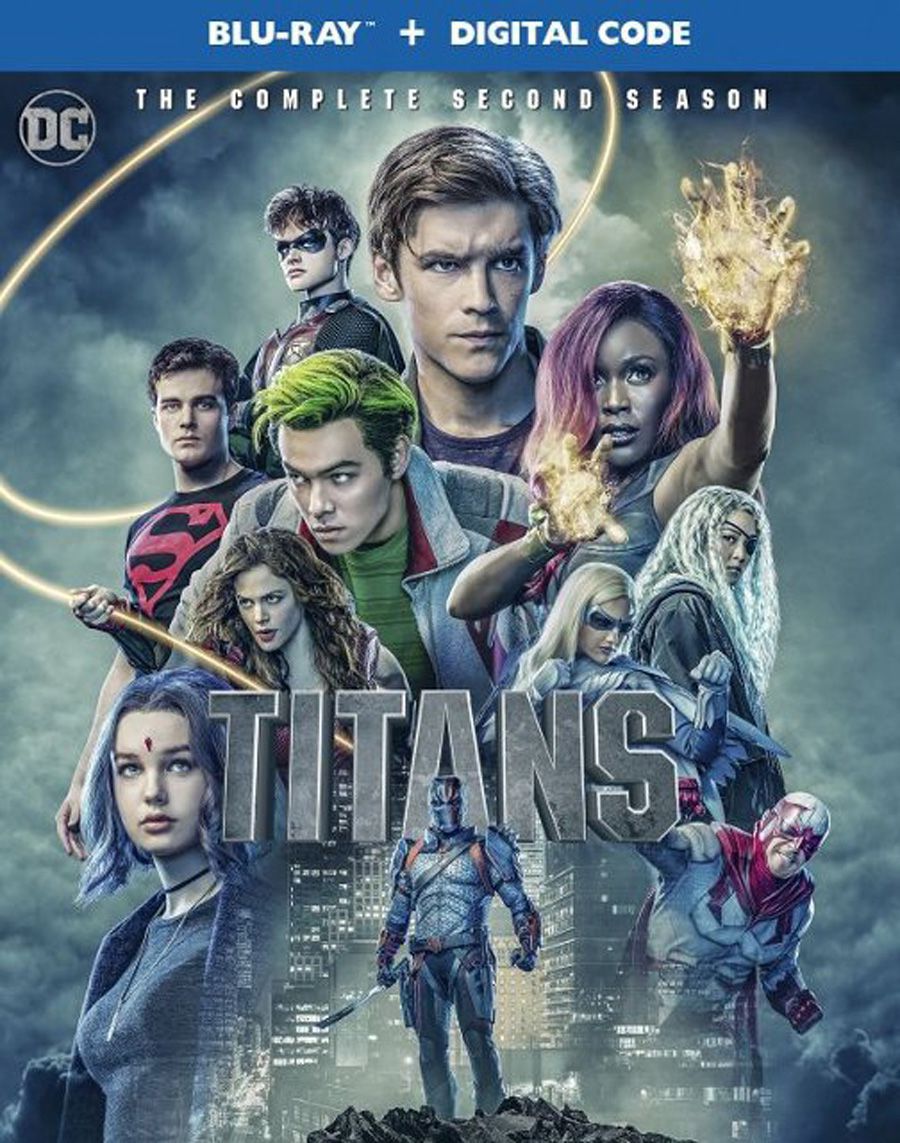 After the coming of age tale and trial by fire of season one, “Titans: The Complete Second Season” digs deeper into its comic book roots and introduces the Titans/Teen Titans most deadly and dangerous villain in Deathstroke (Esai Morales) and weaves a tale of trust, betrayal, love, loss and heartbreak that never lets up over the course of all thirteen episodes.

In season one of “Titans”, we’re introduced to the next generation of Titans with Raven, Beast Boy and Starfire drawing most of the attention. Over the course of the season we’re then introduced to some other major players that have past relations to Dick Grayson/Robin such as Hawk and Dove, Donna Troy and Jason Todd. A season ending cliffhanger introduced someone who we expected to be Connor Kent/Superboy and Krypto the Superdog. Season two takes all of those characters and slowly builds up each individual character thread into an interwoven tale of the Titans past and present. A dark shadow hovers over the older Titans Donna Troy, Hawk and Dove and Dick Grayson. They are all reluctant to come back into the fold when Deathstroke resurfaces and the appearance of his daughter Rose Wilson/Ravager (Chelsea Zhang) complicates matters even more.

Knowing full well that Deathstroke is always one step ahead of them, they encounter other enemies from their past such as Dr. Light who are working with Deathstroke to further his plan against the Titans but trying to keep the team together seems harder than going up against Deathstroke one-handed. Trust or the lack thereof is a major issue and a focal point for the team throughout the season. The sins of the team in the past are constantly trying to pull them apart and take a lot of influence from one of the most influential comic story arcs “The Judas Contract”. When the Titans’ secret if finally spilled out into the open, it’s when the individual members of the team really shine as the episodes focus specifically on one team member and how they have struggled with what they did and how they finally find redemption.

Dick Grayson’s transformation into Nightwing and Beast Boy’s episode about saving the Titans were some of the best stuff I’ve watched in the superhero genre and Deathstroke is hands down one of the best live-action comic book villain adaptations out there although labeling him just a villain is a travesty. As things are revealed regarding the Titans’ past, you discover another dimension to Slade Wilson…one where he tries to protect his family in his own twisted way but one that also won’t take responsibility for his own sins as he places the blame on others, especially Dick Grayson.

I felt that the pace of the various plot threads and individual story arcs was handled excellently throughout this season even with such a large supporting cast. Season one had a few slow moments but season two was a great mix of story and action. When things would nearly build to a boiled pitch, you would get the chance to step back and take a breather with a detour into the events of another supporting character as they lead you through a different path to get you right back to the moment of the boiling point. Superboy’s introduction to the team is the perfect example of how the show would take you through a different path to get to the same events.

Usually with superhero superteam shows, there are unlikeable characters or underdeveloped characters that may not get the proper amount of screen time to tell their story, but “Titans” is full of extremely likeable and down-to-earth superheroes and heroines even if they are space witches and cosmic princesses. Even Jason Todd becomes a very tragic yet likeable character and, in a tribute to the classic “A Death In The Family” Batman story fans once again got to determine his fate this season with an online vote. Characters like Superboy and Hawk are very multidimensional and tragic in their own ways but have bring about empathy and understanding to the messed up things that happen to them and that they bring to themselves.

If there was one thing that I was disappointed about it would have to be the severe underuse and improper use of Beast Boy overall. In the comics and even in season one; Beast Boy is the character that embodies the childish youthfulness and pure joy of being a part of a superhero team. In season two he is relegated to manipulative plot points and character assassination by seemingly everyone he meets. Other than a few red herring moments and his one solo-centric episode, he is most often found in the background or used to further the writer’s views on another character such as Jason Todd or Raven. When things went south, it should have been Beast Boy to keep the team above water with his unrelenting hopefulness.

The most classic Beast Boy moment came from the episode called “Atonement” where he wakes up after the team splits, with all intent and purpose to save the Titans. He happily goes through his daily routine but after four days he is bored out of his mind. He gets someone in trouble, runs from his mistake then realizes that he is the only one that can set things right. The show needs much more of these Beast Boy moments.

“Titans: The Complete Season Two” took everything that happened in the first season and amplified it tenfold. Characters such as Raven and Jason Todd had transformations for the better while others like Dick Grayson, Kory and Hawk went through some ups and downs to finally realize who they are and what they can do. Newcomers like Conner Kent, Rose Wilson and Deathstroke brought so many more dimensions to the show and the potential of where they can go from here with these characters is limitless. We also got to enjoy a slightly different but enjoyable take on Bruce Wayne thanks to Iain Glen…one where he doesn’t don the cape and cowl but provides insight and support to his growing Bat-family. And last but not least, I cannot really put into words how much I enjoyed the introduction of Krypto and the shows complete disregard to the grounded reality of the Titans’ world when Krypto is flying around blasting things with his heat-vision rays. I will never be able to thank the writers enough for saying “here’s a superdog from Krypton with Superman’s powers that’s a complete tribute to the comic books in a world where Deathstroke is killing everyone…FTW”.

With a third season greenlit, I’m looking forward to what these characters will have to deal with next although there was a teaser at the end of the season that gives us a good idea on who one of the main villains will be and she should be a doozy. “Titans” may seem like the darker, goth sister of the CW shows but it really shouldn’t be compared to those shows as it plays by its own set of rules. Season two of “Titans” is definitely one of my favorite live-action superhero adaptions, period. The show seemed to hit everything just right while other shows and movies seem to eventually take a weird and unusual turn whether it’s in regards to the storyline or character misuse. I felt like this was the closest that fans will ever get to a fully realized live-action adaptation of the Wolfman/Perez “New Teen Titans” era, especially “The Judas Contract”.

If you’re looking for an escape from the campiness of the CW shows or from the comedic edge of Ant-Man, Thor and Hulk…diving into the “Titans” world, a world that is both dark and painful as well as bright and hopeful, may just be what Dr. Light ordered.

Bottom Line: A well written follow-up season that shows you that superheroes aren’t perfect, especially ones that are young and left to their own means. If you don’t learn from your past, you’re set to repeat it and those mistakes from the past haunt the Titans throughout the entire season. Season two hits just about every sweet spot.