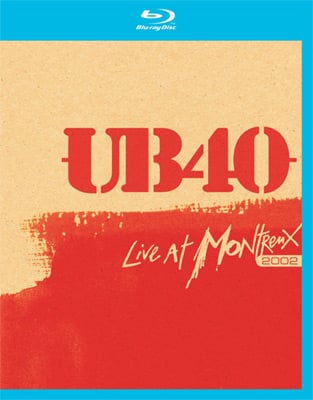 Starring: UB40
Studio: Eagle Rock
Buy On Amazon.com
In 2002, British reggae pop band UB40 played the Montreux Jazz Festival, the famous festival that started in 1967. Eagle Rock has gotten permission to release various performances from the festival on DVD and Blu-Ray for the first time.

I never saw UB40 live before but the current band isn’t what this lineup was. Lead vocalist Ali Campbell left the band in 2008 to start a solo career and money problems within the band. I don’t know who the lead singer is now but I’m sure it’s not as good or not the same thing as the original singer. For this Montreux Jazz Festival, the band perform all the hits from over the years, including some of my favorites like “The Way You Do The Things You Do,” “If It Happens Again,” “Kingston Town” and of course “Red, Red Wine.” Other songs I enjoyed hearing included “Come Back Darling,” “Johnny Too Bad,” and “Wear You To The Ball.” Throughout the concert, UB40 had some guests and backing vocals sing.

The band plays 21 songs in total as you can see from the tracklisting below, and the performance was great. All the songs sound excellent, just the performance is just kind of laid back, which is to be expected. A UB40 concert doesn’t really seem like it would be that energetic to me since its mellow reggae. The quality of the video is excellent and all the footage is professionally done. There’s lots of different coverage and angles.

Any UB40 fan will want to buy this concert Blu-Ray (or DVD if you don’t own a Blu-Ray player).