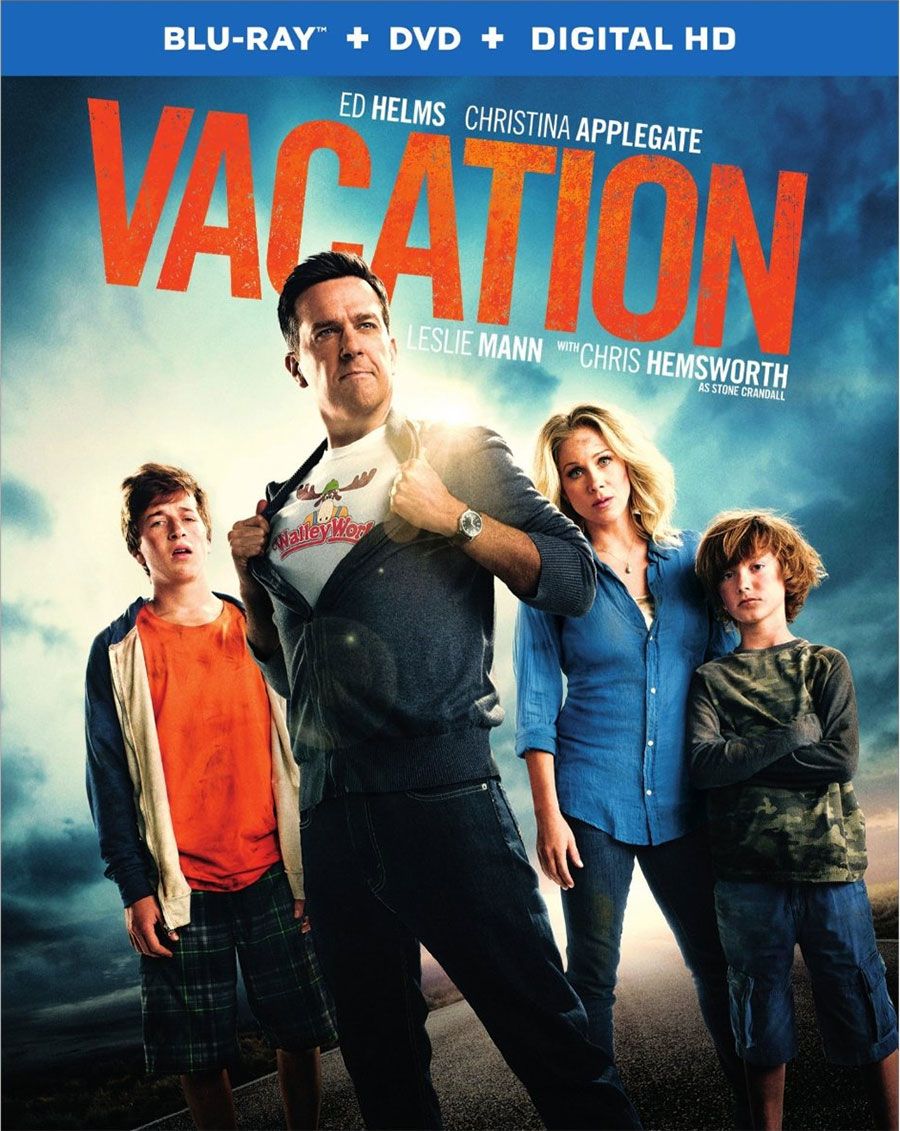 I’ve been waiting for some type of reboot or sequel from the Vacation series for awhile. Now that it’s finally here, I think the film was funny but obviously nowhere near as good as the other movies.

Vacation is now focused on Rusty Griswold (Ed Helms), who is an airline pilot and married to Debbie (Christina Applegate). They have two sons, the awkward older teenager James (Skyler Gisondo) and the bully obnoxious little brother Kevin (Steele Stebbins). Rusty wants to relive the memories of the “original” vacation and take a trip to Walley World with his family. Like other vacations, it turns into a series of mishaps and the trip tests Rusty and Debbie’s relationship.

I didn’t get a chance to see Vacation in theaters so I was looking forward to seeing it. After watching it, I laughed a lot but I still felt something was missing from the movie. Like with other reboots, long-awaited sequels and re-imaginations, the movies just aren’t the originals and usually they let people down. With the original Vacation, there was a purpose for each place they visited. With this one, some of the places they went to seemed forced to use some sight gag or joke. I still laughed but it just wasn’t the same.

There were many references to the original movie, basically the entire premise is based off it as Rusty wants to recreate the vacation. Of course they could have just flown to Walley World and save the trouble. Rusty was one of the smarter ones in the earlier movies, so did he forget how much of a clusterfuck those vacations were? But anyway, wouldn’t be a story if that was the case.

I thought Ed Helms played Rusty well, although I think he plays him a little more dopey than the other versions. Christina Applegate was perfect as his wife, and I particularly like the scene at her old college. I thought the two kids were great as well. I thought Steele Stebbins who played the obnoxious one was hilarious. I thought he stole every scene he was in. Having two brothers, I could relate to how the two brothers acted at times. The kid was just cruel and such a bully to the older brother, but that’s what made it funny. At least I thought he was funny. Chris Hemsworth and Leslie Mann scenes were some of the highlights of the movie. Ladies will particularly love the scenes with Chris Hemsworth. It was nice to see Chevy and Beverly in the film. I kind of wish they were in it more than they were.

The special features were decent enough with some featurettes, deleted scenes, gag reel and other things. The gag reel was real funny but it was only a minute and a half. The two featurettes were good and gave a good enough of behind the scenes footage. They filmed the majority of the movie in Georgia, which explains why Norman Reedus cameos. One of the featurettes goes to each location of the movie and shows footage from those sets. The crew also had to track down the family truckster, which ended up being from a family actually named the Griswolds. They bought and restored one of the cars a few years and looked like the family appeared in the movie as well. The deleted scenes were actually pretty funny and I laughed at some of them. I can see why they were cut for either time restraints or didn’t fit, but at least they didn’t suck.

While I liked the movie and will watch it again, I still think Vacation was missing some of that John Hughes brilliance and charm in the writing and story. Some of the jokes were a little forced as well but the cast was good with the material. I doubt they will do a sequel with this cast based on reviews and box office but I wouldn’t be opposed it. I just hope if they do another one, the story is more original next time.