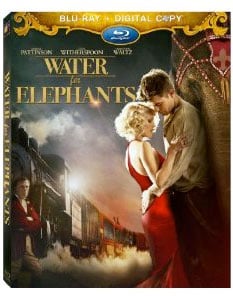 Water for Elephants is a good example of a movie marketed all wrong. 20th Century Fox made this out to be this big romantic drama to get Twilighters to see this but the movie is simply not just that. It’s an interesting look back at the 1930s and the traveling circus world. For not knowing much about this, I thought Water For Elephants wasn’t that bad.

The movie takes place in the Great Depression era, where a 23 year old Polish American Jacob (Robert Pattinson) is finishing up college at Cornell. In the middle of his final exam, he’s informed that his parents have died in a car crash. He also learns that they owed a ton of debt, and he’s forced to foreclose on the house. Without any money or family, he decides to go away and ends up on a train. He realizes he hopped on the circus train for Benzini Brothers Circus. He soon convinces the circus owner August (Christoph Waltz) to let him work for them as a vet since he took some courses on it. Jacob learns how things are really done in the traveling circus and how cruel it can be. He also falls for August’s wife, Marlena (Reese Witherspoon), the star attraction in the show. You can obviously tell that doesn’t go over well with August.

Like I said above, this isn’t just some lovey dovey romance and I’m thankful for that. It’s just a drama from the 1930s, an interesting time in America. The traveling circuses back then were big, so it’s cool to see them getting the movie treatment besides Big Top Pee Wee. I thought the overall story for Water For Elephants was pretty good, but maybe dragged in some spots. Robert Pattinson actually did a decent job with his role, and Christoph Waltz was again a standout performer. Reese Witherspoon was also good in the movie, but I just didn’t really like the chemistry between her and Robert. It was okay but something felt missing from the story to make me believe they were really in love.

The direction was great, as well as the score and the look of the movie. It was cool to see a bunch of authentic looking trains, and circus clothing. At times it felt like you were watching an older movie just because of the way everything looked. But then I realized I’m watching the movie on a crisp Blu-Ray disc. Speaking of the Blu-Ray, is anyone else having a tough time trying to load of Fox Blu-Ray movies lately? Between Star Wars and this, it’s taking at least 5 minutes just to get to a freakin’ menu! My patience is running a little thin when it comes to loading up a movie. I want to put the disc on, and just hit the damn play button!

Besides taking forever to load up the menus, the Blu-Ray also offers up plenty of featurettes. There’s some featurettes on some of the performers like Reese and Robert, there’s a featurette about the book Water for Elephants, featurettes about the traveling circuses of the 1930s and a few other things associated with the movie.

Water For Elephants surprised me because I thought it would be some chick flick. If you like period pieces from the early 1900s, and aren’t afraid of circuses, then check out Water for Elephant.