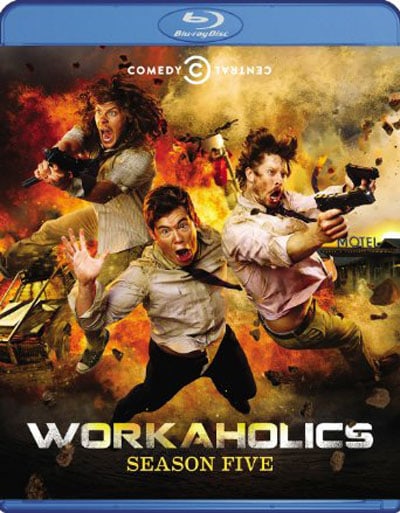 Adam, Blake, Anders and the rest of the TelAmeriCorp crew are back for a fifth season of the workplace comedy. Funeral crashing, 80s trivia, kids in the workplace and the Workaholics origin are some of the powerful topics that are addressed in season 5.

While I haven’t been able to catch much of the last few seasons of “Workaholics”, it’s clear to me that my opinions on the show haven’t changed much since the first few seasons. To me the show is hit or miss. Some episodes have me laughing out loud or thinking to myself…they did not just do that! Other times I’m just sitting there like a lost little puppy trying to understand what the humans are trying to tell me. One episode will remind me of “Kids in the Hall” and then the very next episode is like trying to watch a modern Adam Sandler movie.

Season 5 had its moments, especially the 80’s trivia episode aptly titled “Trivia Pursuits”, the classic wrestling episode “Front Yard Wrestling” and the origin episode “TAC in the Day”. Then there were episodes like “Blood Drive” and “The Slump” that seem to make me dumber with each and every passing minute. The bad episodes remind me of stuff that high school potheads would put on local access channels back in the day. It’s cringe worthy for sure.

There aren’t a lot of extra features with this set, just some bloopers, deleted scenes and some random trailers and clips from certain episodes like the “I love Dolph Lundgren” montage. Speaking of Dolph, I did enjoy the celebrity cameos from the likes of Dolph himself, Tom Arnold and Mark McGrath to name a few.

Quite honestly, I’m surprised that Workaholics has made it up to a fifth season. Like I mentioned before, it’s a hit or miss show for me. I’m also not an alcoholic pothead and have never worked in that kind of office setting so I’m sure that it has its niche followers that will swear by the show and quote it by the water coolers every day. It can still be likeable at times, but those are few and far between.