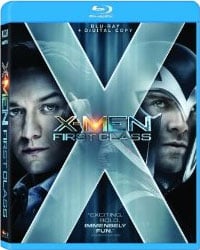 After X-Men: The Last Stand and X-Men Origins: Wolverine, things were looking down for the X-Men comic book series. Thankfully Matthew Vaughn and others made another X-Men worthy of the first two films, if not better!

X-Men First Class shows us the how Magneto and Professor X became friends and enemies, and how the X-Men were created. The movie starts off almost identical to X-Men the first movie, as we see a young Erik Lensherr and his family being put in a concentration camp. Erik suffers the loss of his Mother from the hands of Sebastian Shaw; a Nazi scientist who can absorb energy and is hell bent on causing trouble for humans. Across the pond, we see a young Charles Xavier encounter Raven Darkholme inside his parents’ mansion. Years later, Erik is out for revenge and attacking Nazis in hiding and Charles just finished his thesis on mutation. CIA agent Moira meets Charles and invites him and Raven to talk about the existence of mutants at the agency. Eventually, he ends up joining the CIA on a case that involves Sebastian Shaw and that’s where Charles and Erik meet. The two, along with Raven begin recruiting other mutants for Division X for the CIA. As the group comes together, Charles helps each mutant to harness their powers and learn to control them and their fears. The team has to use their powers out in the field against Shaw, that could effect the United States and the Soviet Union.

Just when I thought I lost faith in the X-Men series, this move comes out and lifts up my spirits. The cast was great, the story was interesting, terrific action scenes, and it’s just about everything I could have asked for in a comic book movie. James McAvoy and Michael Fassbender really did an awesome job as Charles Xavier and Erik Lensherr. I think Fassbender stole this movie because in a way, he was James Bond. The guy going from country to country, tracking down Nazis and killing them; speaking different languages and just being a total badass. I could have watched that for two hours. Well seeing more of January Jones in skimpy clothes wouldn’t have hurt either. I really liked the origin stories of the characters, even though it might not have happened the way it did in the comics. I don’t care, it made it flow with the movies more, which they were trying to do.

It was cool to see which characters they picked for the original X-Men team, even though it might not make sense to comic book nerds. I liked seeing Banshee and Havok, as well as a certain cameo in the movie. That made laugh out loud in the theater when I originally saw this. Between this and Captain America this summer, Marvel really hit a home run with the retro superhero movies. I liked how the story of the X-Men intertwined with the Cuban Missile Crisis and other historic events. With the actions scenes, I’m glad Vaughn finally got to direct an X-Men movie since those scenes were my favorite. The attack on the CIA building was really cool, and the end battle was great too. Instead of having just CGI mutants flying around, they actually dangled stunt people outside on helicopters! That’s the way CGI and action should be handled but filmmakers usually take the cheaper way when it comes to action. I’m really hoping for another X-Men movie soon, with Vaughn at the helm because of the way he handled the action, the story and just everything involved with the movie.

The Blu-Ray certainly has a great amount of special features to watch after the movie. There’s one featurette that is over an hour long! I watched the entire thing, and you saw what their process was. Picking the actors/characters, filming, post-production, and scoring. I was cracking up at composer Henry Jackman because they were bleeping him out every 2 seconds. His score was fantastic and one I like to listen to a lot now. That featurette is the must watch of the disc, but the deleted sceneswere interesting as well. There’s a funny one in there with Charles making Erik dress up as a woman; ah you just have to see it.

I’m extremely happy with the way X-Men: First Class came out, and hope there’s another movie coming out soon that’s even better. Blu-Ray is the way to go with this one because you get the awesome quality, plus the featurettes! Don’t delay true believers, get your ass to the store to buy this one!