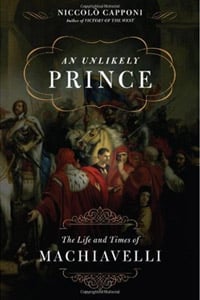 It was fortuitous that I picked up this book at the same time I started playing Assassin’s Creed II. A scholarly biography and a video game wouldn’t normally have much in common, but the two leveraged each other well.

Assassin’s Creed II breathes life into Renaissance Florence and puts you in the action as you navigate the city’s literally cutthroat politics. This new biography does the same, though in different ways. While An Unlikely Prince is on its surface a book on Machiavelli, it is really a treatise on Renaissance Florence and the city’s political and religious (often the same) power broking, which in turn influenced Machiavelli’s cynical writings.

The thesis of An Unlikely Prince is that Machiavelli – now synonymous with using ruthless and amoral manipulation to claw your way to the top – was actually a misunderstood and complex figure. Be that as it may, it’s a thin point to carry a 320-page book, and Capponi spends most of his time discussing – in incredible depth – the political landscape and history of 15th & 16th century Florence.

While the level of research is highly impressive, in truth, An Unlikely Prince is not the most engaging book. It explains countless political maneuvers, parties, and oppositions, and the family lines of their supporters and detractors, but it doesn’t paint a picture of the average street life or the social world below the aristocracy. Assassin’s Creed II, of course, fleshes that out with its fun, parkour-style gameplay. The game is also surprisingly educational; I was impressed with the level of accurate historical information the game sneaks into your brain – architecture, art, city history, politics – all while stabbing someone in the face.

Dense with details, the book is an excellent resource on Machiavelli and Florentine political life. But oddly, I felt I learned more playing Assassin’s Creed II. Perhaps the unlikeliest prince is a video game.