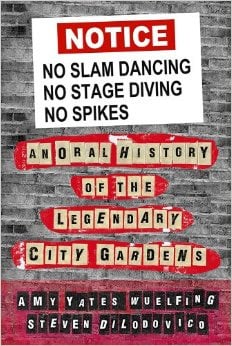 If you grew up in New Jersey, in the 80s and listened to punk, hardcore, ska, metal, new wave and whatever else wasn’t playing on mainstream radio; pretty sure you went to a show at City Gardens in Trenton, NJ. No Slam Dancing, No Stage Diving, No Spikes: An Oral History of The Legendary City Gardens is about the infamous club, written by Amy Yates Wuelfing and Steven DiLodovico. This is a must-read for punk and hardcore fans!

The book is told in a chronological order of events of City Gardens. Randy Now, the promoter, DJ, etc. is one of the main people talking about the events & incidents that happened at City Gardens. Then you have accounts from bands/musicians (Jello Biafra, Gibby Haynes, Joan Jett, Henry Rollins, etc.), security guards, bartenders (one of them being Jon Stewart..yes that Jon Stewart) and many other people.

The way the book is set up is a every paragraph or so is someone else telling their side of things. In a way, it’s almost like how a music documentary would be. Which is funny considering there’s a documentary about to be released about City Gardens and Randy Now called Riot on the Dancefloor. I’m not sure if Amy or Steve have anything to do with that documentary or not but either way, I’m looking forward to seeing it!

What I like about these type of books is the feeling that you went through all this from the all the accounts that you hear. Or at the very least, you kind of wish you did go through all the stuff just so you could say “hey, I went to a show at City Gardens.” I’m surprised there aren’t t-shirts that say “I survived City Gardens and all I got was this shitty shirt.” The same thing can be said for CBGB, which was another club I never went to believe it or not. Out of all the shows I went to over the years, never actually went there. I wasn’t old enough or got into punk or ska until early 90s so I never had a chance to visit City Gardens in Trenton. Even if I did, I don’t think I would have gone down to Trenton since it was too far for when I lived….plus, it was Trenton.

If the first chapter of the book doesn’t get you hooked in, I don’t know what will. It’s about the infamous Butthole Surfers show at City Gardens. There’s nude dancers at an all-ages show, Gibby Haynes lighting his arm on fire, trying to set a bouncer on fire and rioting. Sounds insane but if you’ve ever been to a punk, hardcore, metal, etc. show in some shitty club, you probably have a similar story to tell. These type of incidents and crazy stories just go hand and hand when it comes to punk rock. It wasn’t at City Gardens but I saw guys lighting guitars on fire, huge fights, and other crazy stuff. That’s why I enjoyed this book so much because it reminds me of all the years I’ve been going to shows. If you thought going to shows now was crazy, wait until you read about all the shows at City Gardens back in the 80s! Sure there is CBGB but a bigger, crazier club 90 minutes away was just as infamous and important to the NYC/NJ punk rock and hardcore scene.

For updates on the book, visit their Facebook page.