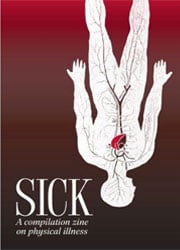 Sick compiles stories and essays from people in the radical/left/DIY communities whose lives have been impacted by medical conditions. As the editor notes, sickness and physical illness aren’t discussed much in the underground subcultures; like anywhere else, talking about illness is taboo, making it difficult for those afflicted by disease to find support within their community.

The essays have a lot in common, though. Almost all of the authors discuss their condition and how it has affected their lives. Unfortunately, though I can’t blame them, most of the essays are written in a too-similar, blandly straightforward way. With no disrespect to the contributors or their conditions, it felt like I was reading the same essay repeatedly but with different diseases and symptoms described. I’m not saying the content isn’t important or shouldn’t be taken seriously, but literary collections can be a chore when they lack variety in prose or voice. I found this surprising since the contributors are mostly young bloggers, zinesters, illustrators, musicians, and other creative types.

One exception is “Scar Mates,” which is intimate and sweet and packs more punch in two pages than any of the other essays. Brittany Shoot’s essay on migraines is also very interesting, and the editor’s “Tips for Being a ‘Patient’” is extremely helpful and useful (take that from a guy who just broke his wrist and a couple of ribs, and is writing this review a day after major surgery).

While I commend the editor for gathering essays on a wide cross-section of diseases, as well as those authors who bravely “came out” about their conditions, interestingly, HIV/AIDS isn’t represented in this book. I imagine it’s a disease that is still taboo in the punk and DIY communities, in which for all its stated egalitarianism and idealism, support and understanding may still be hard to find.

The editor, however, noted that a second edition may come out and he provides his email. If you’re interested in contributing, contact Ben at [email protected].