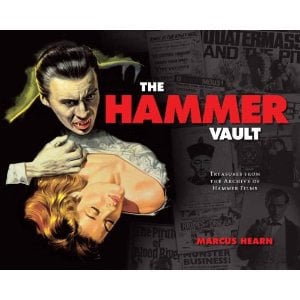 Hammer Films was a British production company that gave us (whether we asked for it or not) a slew of memorably low-budget films, like all those Frankenstein and Dracula movies starring the long-suffering Peter Cushing and Christopher Lee. For its time, Hammer pushed the boundaries with gore, violence, and sex – all which seem tame now, but some actually earned Hammer UK’s adult-only “X certificate.” (Even if you didn’t see the film, you’ve all probably seen the Raquel Welch fur-bikini poster for One Million Years B.C. And in the 1970s, it seemed every Hammer film had to have bare breasts covered in bright-red fake blood…)

Although Hammer produced films from the 1930s, this coffee table book collects press information and promotional information from Hammer’s most successful and notorious decades – mainly from 1954 to the early 1970s. The promotional information, press books, posters, and photos are fabulous to leaf through. Perhaps to its credit, the accompanying text is focused more on the materials than the films themselves. Very little attention is given to the background stories and plots of the flicks, though what insights do you really need about “Lust for a Vampire”?

Instead, the book follows the films from the collector’s standpoint, treating each press book, signed script, and trade advertisement as more valuable than the films themselves (which they probably are). It works – I can assure you that flipping through these Hammer artifacts is more enjoyable than a Hammer monster movie marathon, and the sordid posters are more tantalizing than what was portrayed in the movies. If you think about it, how many dorm room walls had that Raquel Welch poster compared to how many college kids actually saw the dumb movie?

Hammer became notorious more for what it promised than what it showed, and this book’s got all those glorious, obscene promises in one place. This book came out around Halloween but pick it up for Father’s Day – your dad will love it.