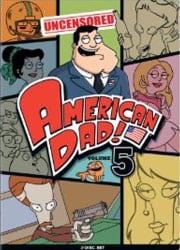 At this stage of American Dad, you’re either watching the show or you’re not. I only watch it when I get it on DVD. There’s only so many shows out there that I can watch in a given season and American Dad isn’t one of them. The show isn’t as good as Family Guy but that doesn’t mean it’s not a horrible show. Volume 5 is actually better than Volume 4, at least that’s my opinion.

American Dad starts off with a silly episode called “Phantom of the Telethon.” It’s the 4th episode in the 4th season, so the rest of the episodes are from season 4 but it’s called Volume 5. I wish the studios would just release the seasons instead of volumes. The episode is about the CIA not having enough money for torture devices because of the Democrats (haha!) so Roger the Alien suggests to Stan to have a telethon. Stan takes the idea as his own and Roger calls himself the Phantom and wrecks havoc on his telethon. Other American Dad plots are about: We find out that Stan is bald, Stan takes a pill to stay up at night to have some “me time,” Stan’s Dad Jack comes back into the picture for an episode, Stan screws up by telling Francine that he has a backup Wife if she dies before him. The last episode of the fourth season and on this DVD is Stan’s Night Out. The episode is about Stan going out with his buddies and hilarity ensue. I actually liked that episode a lot!

American Dad has it’s moments but I don’t think it’s as good as Family Guy. I think if the show focused strictly on Stan Smith and not the rest of the family, I’d think it would be better. I know the show is called American Dad but I think it really should have been about Stan and everything around the CIA and the government. Having the family involved just makes it a nuisance, since I like to watch the episodes when they are strictly on Stan and not on Steve, Roger, etc.

I actually think the show will be better off without Roger. I’m just sick of the character and seeing him dressed up in all these stupid outfits each episode. The voice also gets to me. It was amusing the first season but they should have done something else with the character after that, like shipped him off to Area 51 perhaps? The gold fish Klaus is pointless and just there for another thing that isn’t normal to have a speaking role. Why can’t MacFarlane have a show without any talking animals & creatures?? Last time I had a problem with Scott Grimes’ Steve Smith but I didn’t mind the character this time around. I thought the storylines for the episodes were pretty good, and I laughed out loud quite a few times.

I’m not sure what die-hard American Dad fans thought of this volume/season but I liked it. There are some extras to watch after watching the episodes like deleted scenes, trivia, a drinking game and audio commentaries on all the episodes. The trivia is just a pop up video style over the episode Bar Mitzvah Hustle. I liked that because you just learn little things here and there. So if you haven’t seen American Dad yet, be sure to watch the earlier seasons before getting this one (obviously).