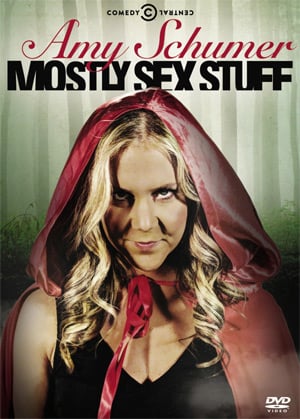 Mostly Sex Stuff is Amy Schumer’s first one hour stand-up special. I think she’s fantastic on the Comedy Central Roasts but some of these bits could have been funnier. This is still very funny though.

This TV special was filmed at The Fillmore in San Francisco. I have no idea why you need to know that but that’s what is on the back of the DVD cover. Amy talks about a variety of topics like her mom is a c u next tuesday, awkward grooming appointments for her vagina, uncircumcised penises, annoying bathroom attendants, morning after pill, and lots of other sex jokes.

I didn’t really have any favorite bits but I chuckled a lot throughout the hour. I did like the bathroom attendant bit but I just can’t stand when places have those attendants. It’s so awkward. Nothing like having someone watch you take a leak or hear you dropping bombs. Of course all the jokes about sex were pretty damn funny too.

I liked this stand up act from Amy but I think her jokes are more geared toward women. At least that’s my opinion. I still laughed though because hearing stories about getting your vagina waxed from an old Cambodian woman is always hysterical.

Features
Pre-Show With Amy And Her Sister
Amy’s Uncut Performances From:
The Roast Of Charlie Sheen and The Roast Of Roseanne Barr