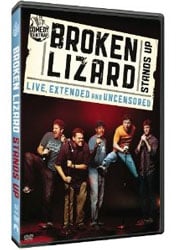 The guys that brought you Super Troopers, Club Dread, BeerFest, and others go back to their roots and perform stand-up & sketch comedy. The comedy troupe performs at El Rey Theatre in Los Angeles, California and it’s one not to be missed if you enjoy their movies!

The DVD starts off with the group doing a pre-show ritual and then Steve Lemme comes out to talk a little about bit. Brings up masturbation, and reveals little secrets about the other guys in the group. Kevin Heffernan does a Susan Boyle impression next and as the show continues, each member gets their own 15 minute spotlight. Sometime the guys do something together like tell stories or do sketches. Each guy has their own style for their act, but in the end they all have similar tastes and jokes…usually about weed, sex and jerking off. They have to mold their acts on their demographic basically.

I didn’t necessarily find everything laugh out loud funny with this stand-up special from the Broken Lizard guys. It was okay and it entertained me for however long it is. I liked the Patrick Swayze story with Steve and Kevin. They talked about how big of a “P Swayz” fans they are and what it was like meeting him for the first time. It was at a Hollywood party and didn’t really go as planned or how they wanted. I also liked the digs at each other and everyone ribbing on each other. Kevin’s bit about him being the “Bear of the Day” was amusing as well. Some of the stand-up acts fall flat, some are better than others but in the end, It would have been nice to see the guys doing more sketch comedy as a collective comedy troupe…since that’s what they are known for. Instead, there’s solo stand-up acts and short sketches and stories in between. These guys should take a note from Kids in the Hall, Little Britain and Monty Python and do shows just on the sketch comedy part.

The special features include a Super Troopers sketch featuring audience members, behind the scenes of them on the road, and some outtakes. I like the Super Troopers sketch and felt they should have done more of this type of stuff (like I mentioned above). On The Road With Broken Lizard was good and is about 22 minutes long. You get to see them traveling in a van, and goofing off on the road.

Not sure women will enjoy this as much as guys for some reason. Broken Lizard’s comedy seems like it caters to college kids, frat boys and stoners. I’m not even sure most people will like this if you haven’t seen movies like Super Troopers, Beer Fest, Club Dread and other movies they have done. The movies are referenced repeatedly and people might not get the references if they go into this with a clean slate. I’d rent this one before buying it.