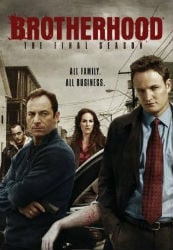 The Caffee brothers are back for the final 8 episodes of the series in this explosive third season, as both battle for control of The Hill in their own peculiar ways. Starring Jason Isaacs and Jason Clarke as Irish- American brothers, Michael and Tommy, one of which is a gangster and the other a State Representative. Sometimes the line is blurred which one is actually doing a better and legal job. Set in Providence RI, the final season brings story lines packed with violence, corruption, death and deceit.

It’s been some time since the end of Season 2 on Brotherhood and things are different these days. Michael Caffee is the acting boss in the local Irish mob, since Freddie Cork has been incarcerated. Tommy Caffee is the latest errand boy on The Hill for Speaker of the House, Rep. Donatello and it’s not where Tommy wants his career to head. His wife, Eileen is 8 months pregnant and things are on the mend between the two since the last time we saw them in Season 2. Tommy and Michael’s childhood friend, Declan (Embry) is still with the Rhode Island Police and Tommy gives him an assignment with a secret task force to find corruption inside the Government. Tommy hopes that this just sends Declan in circles and away from him and his questionable behavior. However, unbeknown to Tommy, Declan has his own agenda and wants to bring down everyone involved with corruption, including Tommy Caffee. Meanwhile, Tommy is aware that his past agendas might be catching up with him, he promises his wife to leave behind the political life for greener pastures and possibly moving out of town away from The Hill.

On the other side of the spectrum, Michael is now acting as the crime boss for the Irish in town. Last season, Freddie Cork was arrested and nearly whacked before he got away from a set up. This year, Freddie is ready to get out of jail and try for a normal life per his parole. Of course it doesn’t last long as Freddie is forced to embarrass himself by begging back into his organization and act as a soldier for Michael. Freddie’s schemes and waits for his turn to arise again hoping Michael will piss off enough people, Freddie can regain control. Michael’s cousin Colin from Ireland is now his 2nd in command, doing Michael’s dirty deeds with him and starts to develop feelings for Michael’s girlfriend Kath. Michael becomes aware of this, and starts becoming paranoid on whether or not his cousin is fooling around with him. The final season certainly ends on a dramatic note and wraps up many of the series story lines.

Like other Showtime series, this set did not feature any extra bonus features. Unfortunate, especially since this is the last season of this excellent series. I’m quite disappointed this show is not returning because I have been a fan from day 1, and seeing a show like this, that features excellent story lines, casting, action and drama leaves a void on television. I wish Showtime had it in it’s heart to bring it back even though quite a few story lines were wrapped up in the last episode, mainly due to Showtime’s reluctance to renew the series. Jason Isaacs and Jason Clarke were excellent as the Caffee brothers, and the supporting cast were phenomenal from Ethan Embry, to Annabeth Gish, to Fionnula Flanagan, and Kevin Chapman. Brotherhood is one series I am glad to have witnessed.